By Coach Tina Turn
KCC at Tri-County
The Bearcats met up with their first Northern Lights Conference opponent of the season when they hopped the bus to Karlstad to take on the Northern Freeze on Tuesday, Sept. 6.
Energy was high as it usually is for games on the first day of school, and the Bearcats started things out strong with quality serving and very few errors. Senior outside Ella Olson had the hot hand in the opening set and notched 4 of her 8 kills in the stats book. On the defensive side, Olson also had a set-high 4 digs. The solid start ended in favor of the Cats 25-11.
Set two was a whole different ball game. The Freeze found their groove at the net and put up a solid block, forcing KCC to look for a way around the blockers. This stunned the Cats, it seemed, as energy dropped and the Freeze steadily gained momentum. The Bearcats only earned 8 of their own points in the set, which means NF handed us a healthy amount of points on their errors. Despite that help, KCC couldn’t close the lead and fell 21-25. Freshman Kaydence White was the only player to record more than 1 kill in the set; she had 2.
The third set proved to be an exciting one. KCC was on the downside of the scoreboard for most of the set. When behind 10-18, the Bearcats called a timeout and re-grouped. Olson stepped to the service line and played cat and mouse with the Freeze receivers, thus disrupting their groove. She served 7 straight points to help her team back within striking distance. Freshman Afton Lindgren next stepped to the line five times. Her serving put the NF on their heels again and the Bearcats helped themselves to a big comeback win 25-23. Sophomore outside hitter Berlyn Strege found the sweet spot through the blockers and swung for 6 of her 11 kills in set three. Senior Aidra Johnson wasn’t far behind with 4 kills. White and Johnson each had a solo block in the exciting set.
In set four, the Bearcats played it safer at the serving line while on the flip side, the Freeze nailed the KCC receivers hard. Failure to get the ball in system made for a lot of free balls heading across the net. Even though White had a solid 4 kills in the set, the Bearcats couldn’t pull it out at the end as the Freeze knocked across 2 kills and ended the game with a decisive block and a 25-22 win.
For set five, the Bearcats came out with a fighting, competitive spirit.
Sophomore setter Morgan Turn opened the set with 2 aces, followed by 3 more serves that put the Freeze out of system. Next, Olson stepped to the line and secured a point on a service ace. The Freeze defense kept digging up our balls, but our defense responded with some scrambling saves that fueled the team to finish strong and get a 15-5 decisive set win.
The night was kind of a roller coaster for the Bearcats. We had strings of serving tough followed by strings of serving too easily. We will strive for more consistency moving forward. Our two middles, White and Johnson, had a great night at the net, combining for 8 solo blocks and 18 kills, 9 each. Despite not having improved our serve receive passes as much as we would have liked, setter Turn used her quickness to get to the ball and provide quality sets to our hitters, which they converted on 37 times. It was huge for us to nab a five-set win so early in the season. For a group of young players, it’s a big confidence boost knowing that when they are tired, they can play like the athletes they are and make big plays when it matters most. We will happily put our first W in the win column to move our record to 1-1.
Scores:
7th grade: 25-13, 25-15
8th grade: 25-2, 25-9
C-team: 25-19, 25-15
JV: 25-14, 25-14

KCC vs. EGF
The home opener for the Bearcats was a wild match in front of a large crowd of fans who got their money’s worth. This five-set thriller took place in Hallock on Thursday, Sept. 8 against the AA East Grand Forks Greenwave.
In the opening set, KCC jumped to an early 5-0 lead behind the serving of sophomore setter Morgan Turn, but that is where the ease ended. The Bearcats went on to make 18 errors in the set, essentially handing the Greenwave the 25-23 win. Missed serves and hitting errors were the primary culprits.
Set two was also a loss for the Bearcats, and even though the loss was by five points at 20-25, it was a cleaner set with only 11 errors. Senior outside hitter, Ella Olson, did her best to bring the offense with 6 kills. Sophomore Berlyn Strege messed with the EGF serve receive and rattled off 8 serves, but that was the only surge of the set for KCC.
The Bearcats knew they had their work cut out for them heading into what was a decisive third set. This young and inexperienced team took on the challenge and it paid off. Senior middle Aidra Johnson, who had been scoreless in the first two sets, found her groove and swung for 5 kills to pace KCC and aid in the close 25-23 win.
In set four, KCC kept their eyes on the prize. Three attackers tallied 3 or more kills to form a more balanced offense while defensively, sophomore Lily Peterson kept the back court running with solid passing and 3 digs. To give themselves a chance for the match win, KCC nabbed the fourth set 25-22.
There were 8 straight kills to jumpstart the important set five. Fortunately 6 of those kills were in favor of the Bearcats. KCC was able to hold that lead and secure the victory with a 15-11 score.
I have to think that the girls learned so much in this five-set battle. This 2022 team is quite young and inexperienced, and every battle they pull out allows the team to build confidence. In this match, they learned just how much making a bad choice on an offensive swing can hurt momentum. Passing and defense had much improved from the first two matches of the season, however, hitting errors multiplied. Despite that, I am confident that we can put the two pieces together as the season progresses.
Scores:
8th beat 7th 2-0 in an
intersquad scrimmage
C-team: 25-14, 25-22
JV: 20-25, 25-15, 15-13 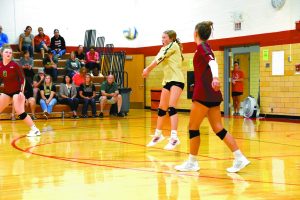 LilY PETERSON, Sophomore Libero FOR THE BEARCASTS, gets a hit during the Bearcats’ five set match against the East Grand Forks Greenwave. Peterson had nine digs in the match to help her team defeat the Greenwave.
(Photo courtesy of KC Media Arts) 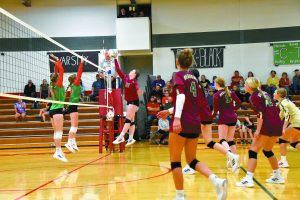