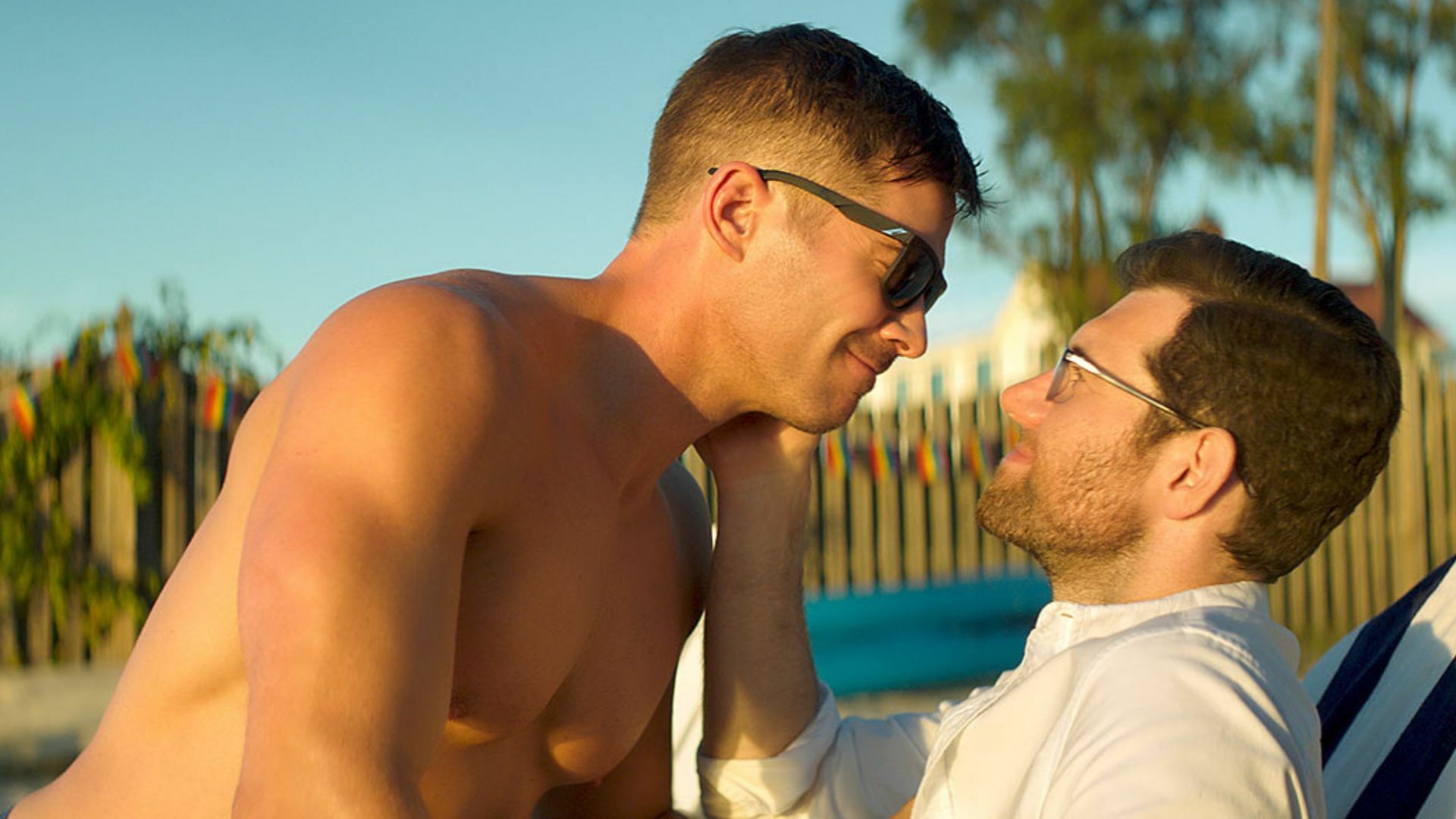 I'll be frank: Seeing the chipper trailer for Bros, I'd feared Billy Eichner had finally lost his edge. Sure, over the years, the abrasive comedian has softened his tone to create a more family-friendly grump, with a recurring role on Parks and Recreation and voice work in The Lion King (2019) and Bob's Burgers. But as the leading man in a gay rom-com, it seemed he'd finally kowtowed to the oppressive heteronormativity of the genre. A trailer that boasts a straight couple singing about gay sex, swelling with a sanitized rock song, made me think the battle was lost — and Billy with it.

Well, I'm proud to admit I was wrong. Bros is a boldly gay comedy that defines love on its own terms.

Bros is a Billy Eichner comedy, no doubt. 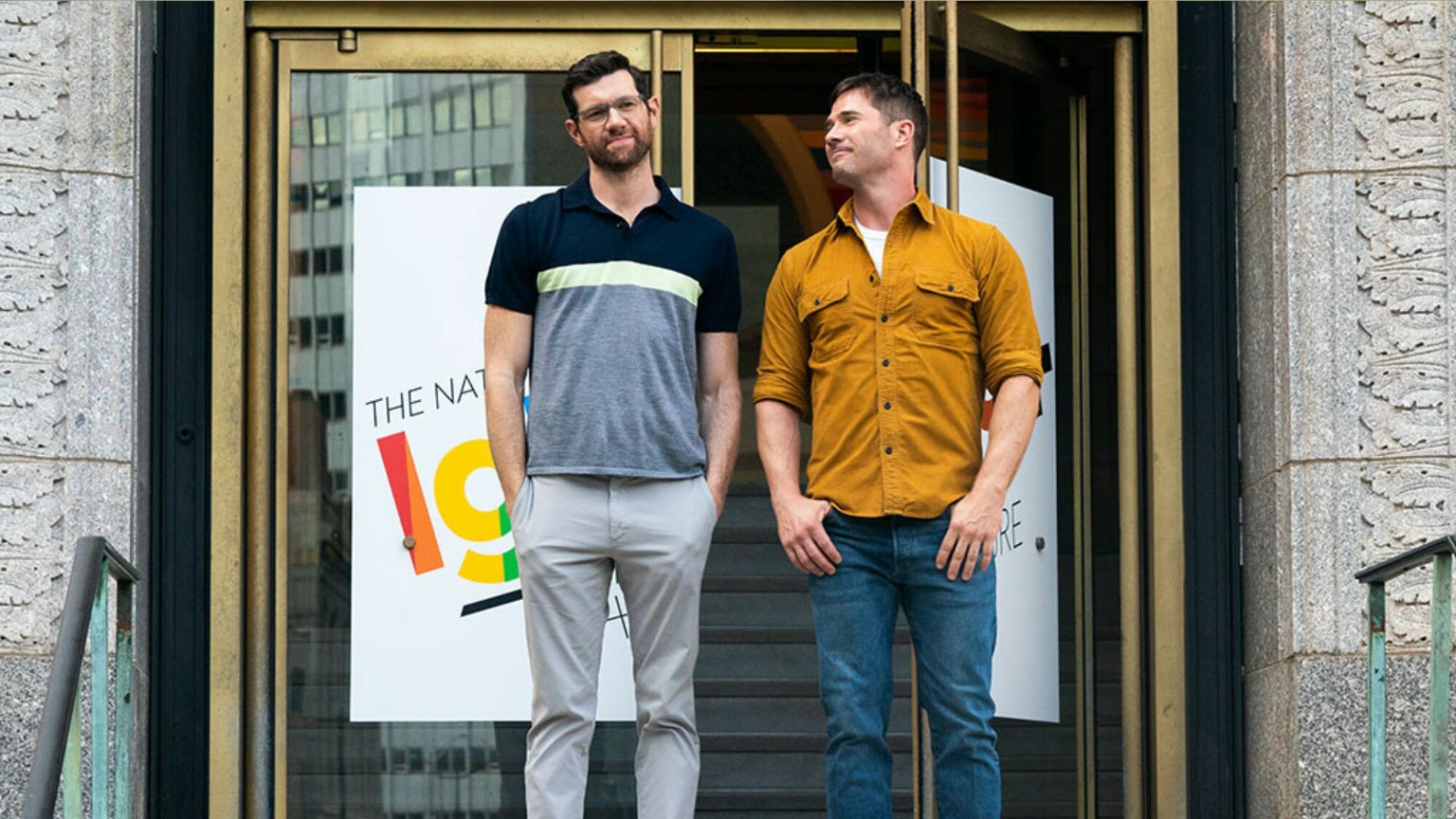 In the 2010s, Eichner made a name for himself with a bombastic brand of humor that was as aggro as it was gay. Whether he was snarking over nepo babies in Difficult People or bellowing at passersby in Billy On the Street, the tall, teeth-grit comedian gave white male queerness a voice that demanded to be heard. His brand of camp meant taking celebrity culture and diva worship so intensely that it demanded public tantrums and obstacle courses that felt like Double Dare meets Drag Race. This collision made him a polarizing figure, not just to audiences who bristled at his pull-no-punches jokes but also among LGBTQ+ people, who debated if this was the kind of representation we wanted.

Want more about the latest in entertainment? Sign up for Mashable's Top Stories newsletter today.

Eichner addresses these critiques head-on in Bros, first by playing a big-screen analogue of himself, a New Yorker and intellectually acclaimed "cis gay white man" (he literally wins this award) named Bobby who has had a lot of infuriating run-ins with straight people trying to put him in a tidy gay box. An opening diatribe allows for a hilarious montage that pitches him into an array of outrageous situations, like a failed audition for Queer Eye, where his furrowed brow clashes with the giddy zeal of the perky makeover squad. Bobby openly challenges the concept that gay guys have to be happy or sweet or helpful to earn their existence, cursing not only the cliches of the sexless gay BFF but also the sugary sentimentality of Schitt's Creek. He even has ire for LGBTQ+ youth, who don’t seem to grapple with the fear and self-loathing of Eichner’s generation. Bobby quips sharply, "We had AIDS; they had Glee." 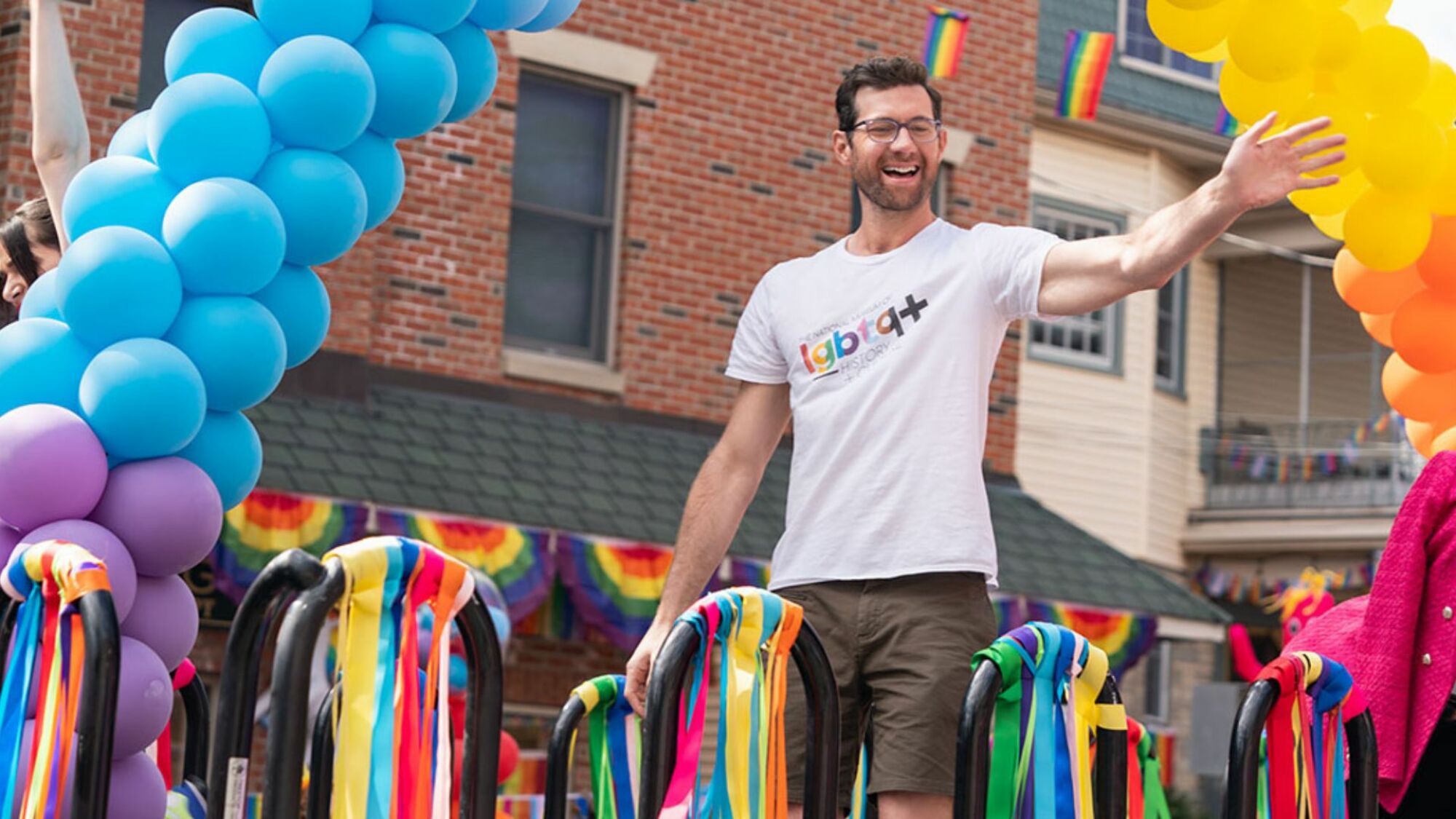 Eichner and co-writer/director Nicholas Stoller — whose directorial debut Forgetting Sarah Marshall is a modern rom-com fave — don't hold back on their ire for romantic comedies either. Early on, Bobby denounces the popular slogan that "love is love," arguing that queer people used this concept to sell our right to live and love in peace to homophobic straight people. Mocking the callous capitalistic commodification of LGBTQ+ culture, Bros creates a running gag of "Hallheart" made-for-TV movies that take the cliched concepts of straight rom-coms and sloppily copy them over to appeal to LGBTQ+ audiences with desperately punny titles. Meanwhile, Bros' love story rebuffs such homogeny by offering group sex scenes, guilt-free hook-ups, and the assertion that neither monogamy nor marriage is essential for lasting happiness.

However, a pop culture devotee like Eichner wouldn't totally throw the baby out with the bathwater. While "write your own story" is an edict within Bros, he and Stoller find ways to neatly tie it to the rich history of the genre's very best…albeit with little twists. There's a knowing nod to When Harry Met Sally, of course. And instead of Meg Ryan and Tom Hanks anonymously DMing in You've Got Mail, Bobby and the hunky lawyer he's crushing on (Luke Macfarlane) text awkwardly, attempting to balance flirtation with the façade of chill. The title Bros reflects the characters' desire to keep things casual, but also the comedic absurdity of pushing away intimacy when your heart yearns so!

Bros is a Judd Apatow comedy. 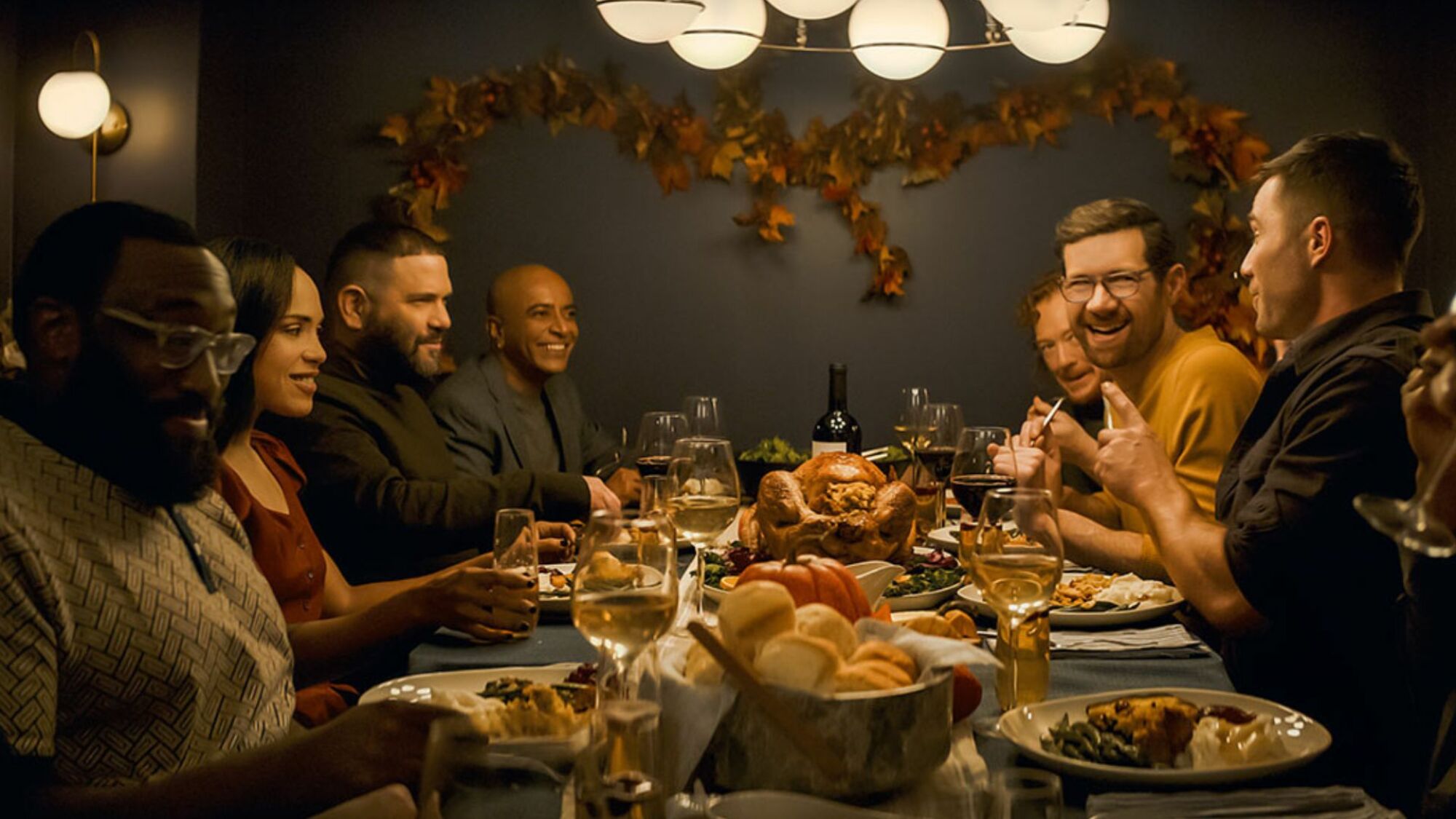 Apatow didn't direct, but you can feel the producer's hand in the movie's indulgences. Some of them work. For instance, the meta-element of Billy playing Bobby gives fans of the cutting comedian a recognizable thrill of the familiar and arguably authentic, like they might have felt in Trainwreck or The King of Staten Island. Also true to Apatow's brand is the film's heavy-handed emotional beats. Here, that means Bobby delivering a passionate speech about the barriers he built to keep moving forward in a small-minded world that told him he's too much. Sometimes it means Bobby unfurling real LGBTQ+ history about Stonewall, Abraham Lincoln, and Marsha P. Johnson.

I've heard some grumbles about the history drops, which are supported within the film by Bobby's quest to open America's first LGBTQ+ history museum. Personally, I found these bits bolstering, refusing to allow the audience to forget how much and for how long this community had to fight to even be acknowledged, much less accepted. It's not just important information, it's a legacy Bros carries with it by being the first major studio-made gay rom-com with a theatrical release and an all-LGBTQ+ principal cast. It's not the first step for queerkind, but it's still an important step in our ongoing journey.

With a charismatic cast of museum workers, Eichner has included representation for lesbians, bisexuals, trans people, non-binary people, and LGBTQ+ people of color, played by Dot-Marie Jones, Jim Rash, Eve Lindley, TS Madison, and Miss Lawrence. While all these performers sparkle in their spotlights, this chaotic bi especially appreciated every apoplectic proclamation Rash made about bi erasure. It's a cliche, but yeah, I felt seen.

However, Apatow has long been criticized for turning in comedies that feel too bloated to keep up their momentum. Stoller, who also helmed Neighbors and Get Him to the Greek, tends toward comedies with a lot of moving parts and thereby occasionally longer runtimes. Given these respective tendencies, it's not a huge surprise that Bros lags in the final act. What should feel like a rush becomes weighed down by a harried attempt to pay off one or two threads too many. And a song number that should be heart-soaring falls a bit flat, as Eichner's incredible talents don't quite extend to compelling musical theater. The jokes of the song land great, but the sincerity feels forced.

This fumbling finale aside, Bros is a spectacular comedy, crackling with New York wit, queer snark, and a slathering of heart. Eichner and Macfarlane share a steamy chemistry that achieves the too-rare goal of making a rom-com genuinely sexy. Stoller's skill with multi-faceted funny stories enables Bros to balance meta elements with a winding plot, a collection of attention-snatching characters, LQBTQ+ history, and a pumping emotional core. It's not always a smooth ride, but it's always an entertaining one.

Bros was reviewed out of its World Premiere at the 2022 Toronto International Film Festival. The film opens in theaters Sept. 30.