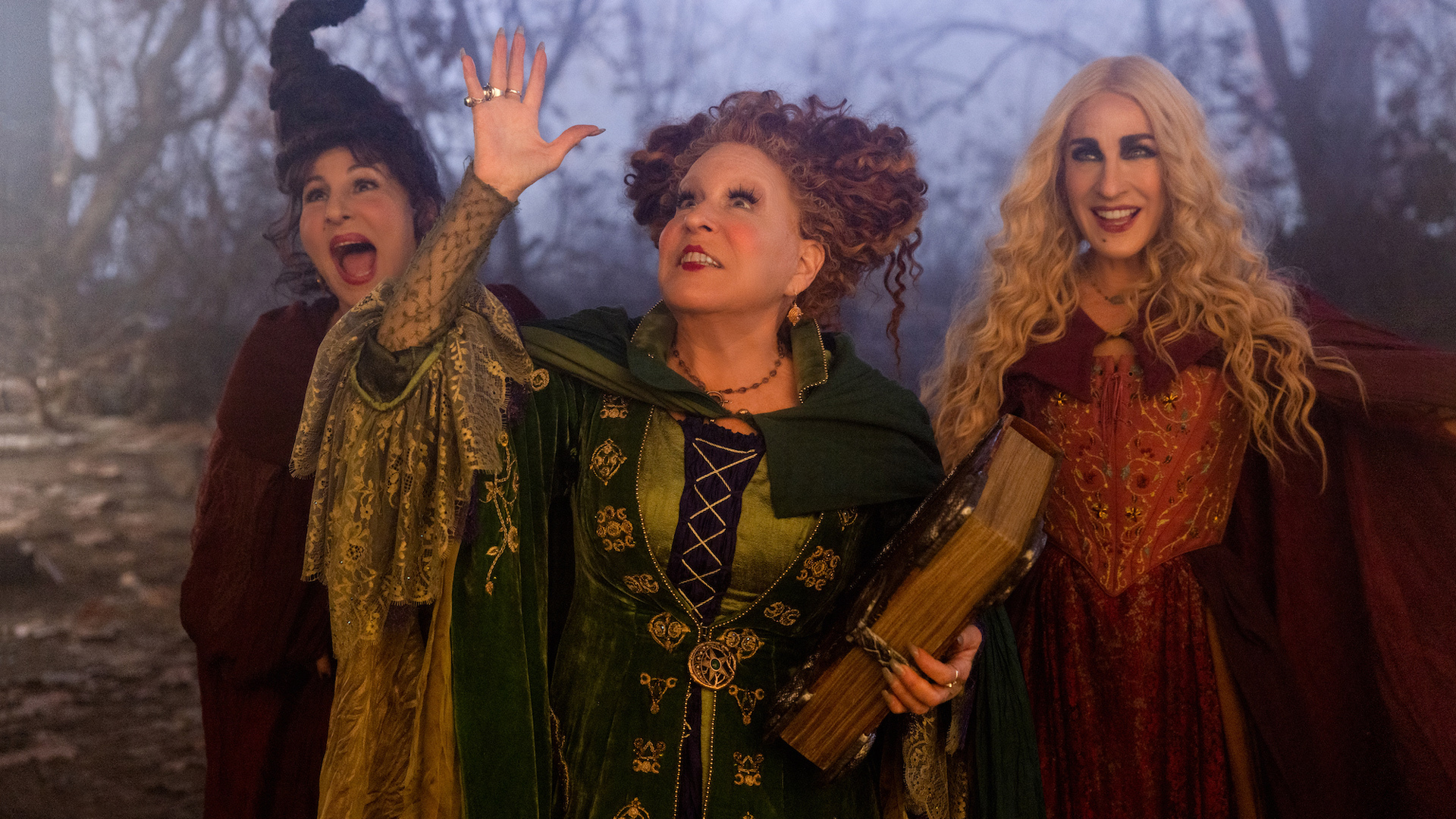 Broom, ho! The long awaited sequel to 1993's Hocus Pocus is here, and it’s a wickedly fun nostalgia trip, one that’s seen us light many a Black Flame Candle to bring about its triumphant return.

Hocus Pocus 2's narrative follows the original’s main breadcrumbs faithfully, with executed witches The Sanderson Sisters accidentally resurrected again with the lighting of the Black Flame Candle, 29 years after Max, Allison, and a tiny, sassy Thora Birch did it in 1993. The witches' mission? To suck the lives out of the children of Salem before sunrise, of course, otherwise, it's curtains! They evaporate! They cease to exist!

And oh, by Lucifer’s hangnail, is it good to have them back.

The only way a reboot of a ‘90s nostalgic film like Hocus Pocus would work is if the original leads were fully committed, and in this case, the core trio do not disappoint. As the all-powerful Sanderson sisters, Bette Midler, Kathy Najimy, and Sarah Jessica Parker pick up right where they left off almost 30 years ago, stepping back into their iconic witches' gowns with all the glow of a Sanderson calming circle. Essentially, they look like they’re having an absolute blast. 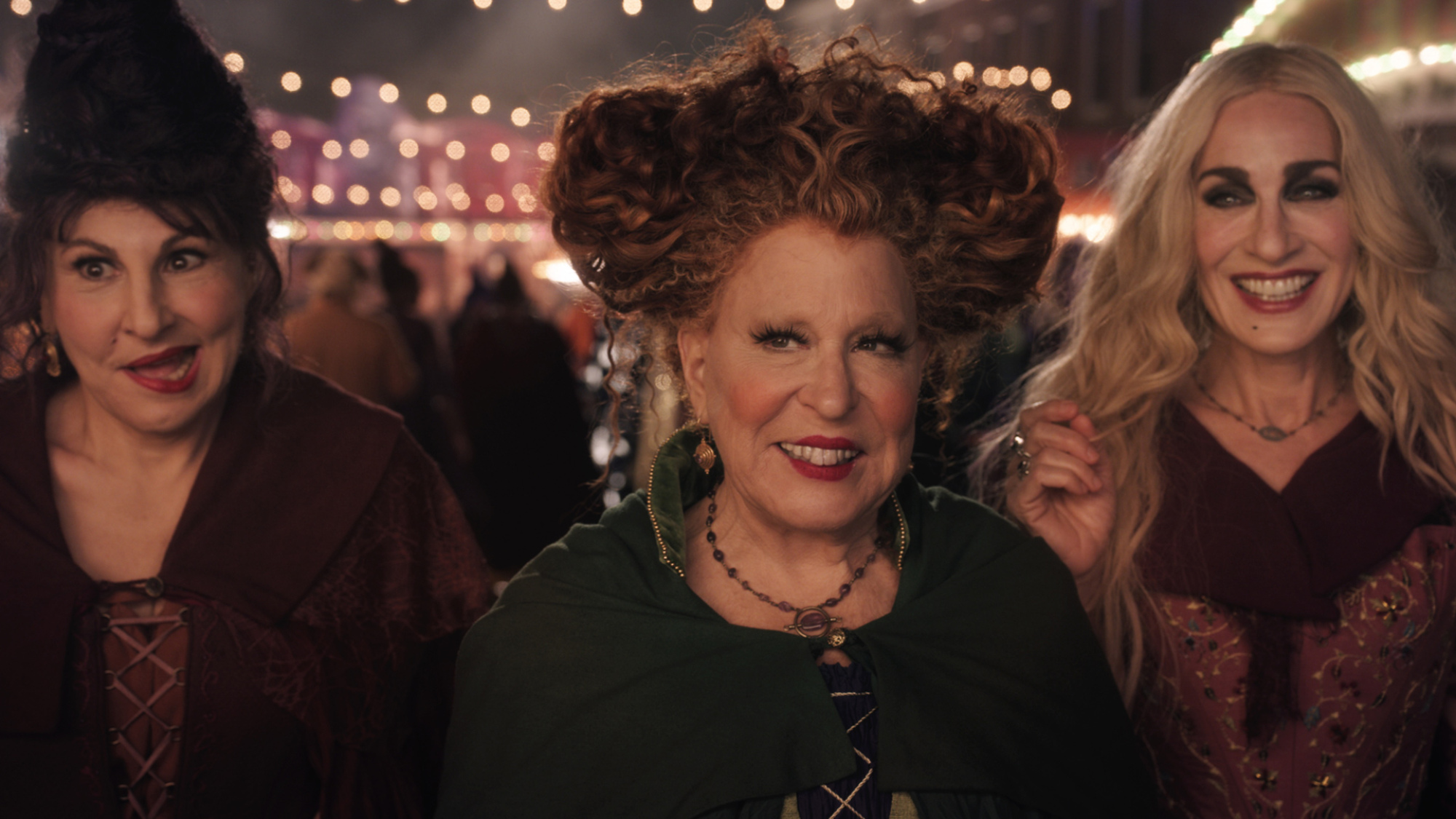 Midler's sublime Shakespearian melodrama as Winifred "Winnie" Sanderson is back in supercharged form, wide-eyed, open-clawed, bellowing "Lock up your children!" and generally abusing the crap out of her sisters just like old times.

Najimi hilariously barks and sniffs her way right back to her beloved role as Mary Sanderson, hunting children with her nose, making constant witchy wisecracks, and threatening to lovingly fricassee kids. When Najimi holds up a face mask as “the face of a child” and then eats it, I cackled like a Sanderson sister. 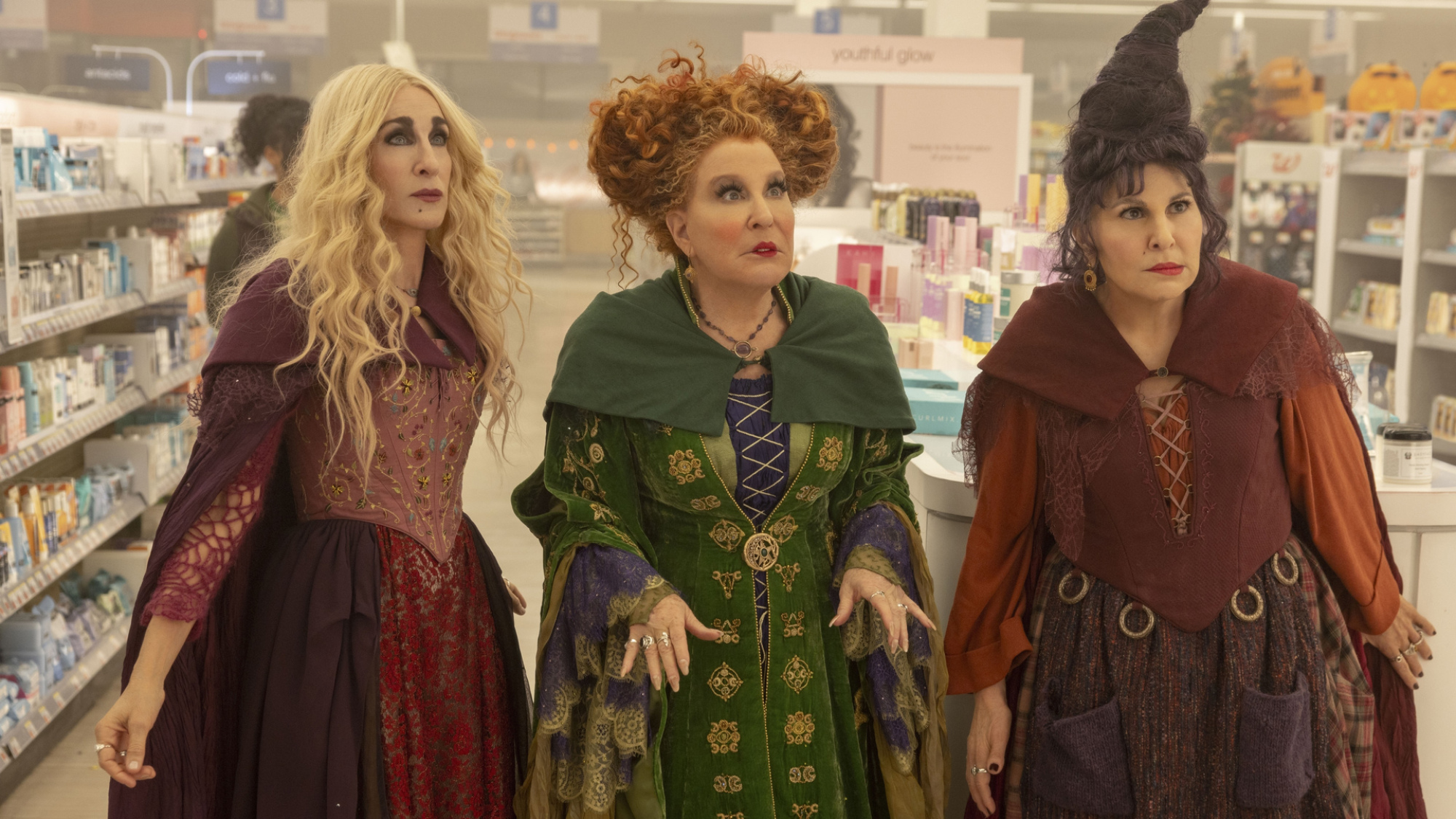 "Observe, sisters, it glows from within with a sickening light." Credit: Disney

The formula is still perfection: Winnie booming operatic statements while Mary overanalyses the detail and Sarah misunderstands the general point, all awash in glorious physical slapstick comedy magic. Like the original, the trio deliver choreographed spell-casting, several Little Shop of Horrors-worthy musical numbers, and melodramatic sobbing circles with the crackling energy the film hinges on. As Izzy (Belissa Escobedo) says in awe at one point, "I literally can’t stop watching them."

Hocus Pocus 2 leans on the original’s best source of narrative comedy: watching the Sanderson Sisters bumble through interactions with 21st century technology. One particular sequence involving the witches gazing upon a Walgreens — "Observe, sisters, it glows from within with a sickening light," — battling the automatic store doors, literally cursing the fluorescent lighting, and plundering the beauty aisle, is a glorious highlight. And a shoutout must be made to Najimy’s interaction with her modern broom option: two Roombas replace her vacuum cleaner from the original, to hilarious effect.

Flying into the past, back to 1693, Hocus Pocus 2 also gives us a glimpse at the young Sanderson Sisters, banished from Salem and escaping persecution in the forbidden woods. Taylor Henderson, Nina Kitchen, and Juju Journey Brener are perfectly cast as little Winnie, Mary, and Sarah, and Henderson in particular, is an absolute triumph, having Midler’s physicality and tonal delivery down to the sassy syllable.

New witches on the block

Reboots like Hocus Pocus 2 inevitably come with a shiny new crew stepping into large pointed boots, and the additions to this sequel aren’t to be trifled with. The sequel sets up a new trio that takes the reins from originals Max, Allison, and Dani, but also forms a witchy new crew. Whitney Peak and Belissa Escobedo strike the perfect Gen Z tone as Becca and Izzy, navigating an awkward friendship breakup with Lilia Buckingham as the defiant Cassie. D'Angelo's crisp, self-aware script even has Becca call out the obsessive patriarchal fear of female aging to explain the inclusion of the narrative trope of witches getting their powers on their sixteenth birthday (see: Sabrina). 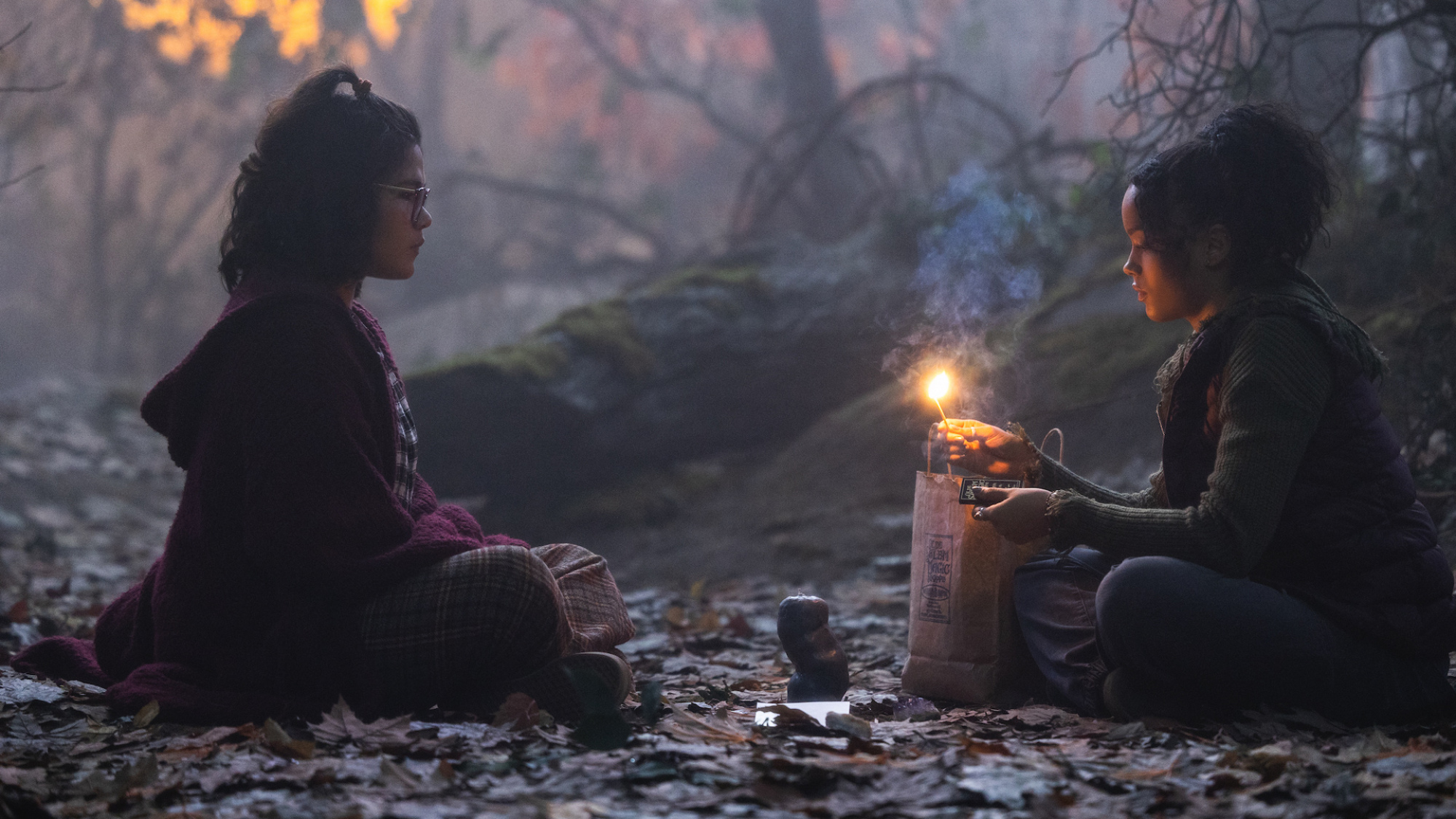 In one criminally short appearance, Hannah Waddingham steals hearts and the show as the witch of the Salem woods, formidably flinging her giant cape around and booming about Salem being "run by FOOLS!". Waddingham's character changes the story of the original, in which Allison says Winifred's beloved spellbook was "given to her by the Devil himself"; in Hocus Pocus 2, it's the witch of the woods who does, making her promise not to utter Booo-oooook's most powerful spell. 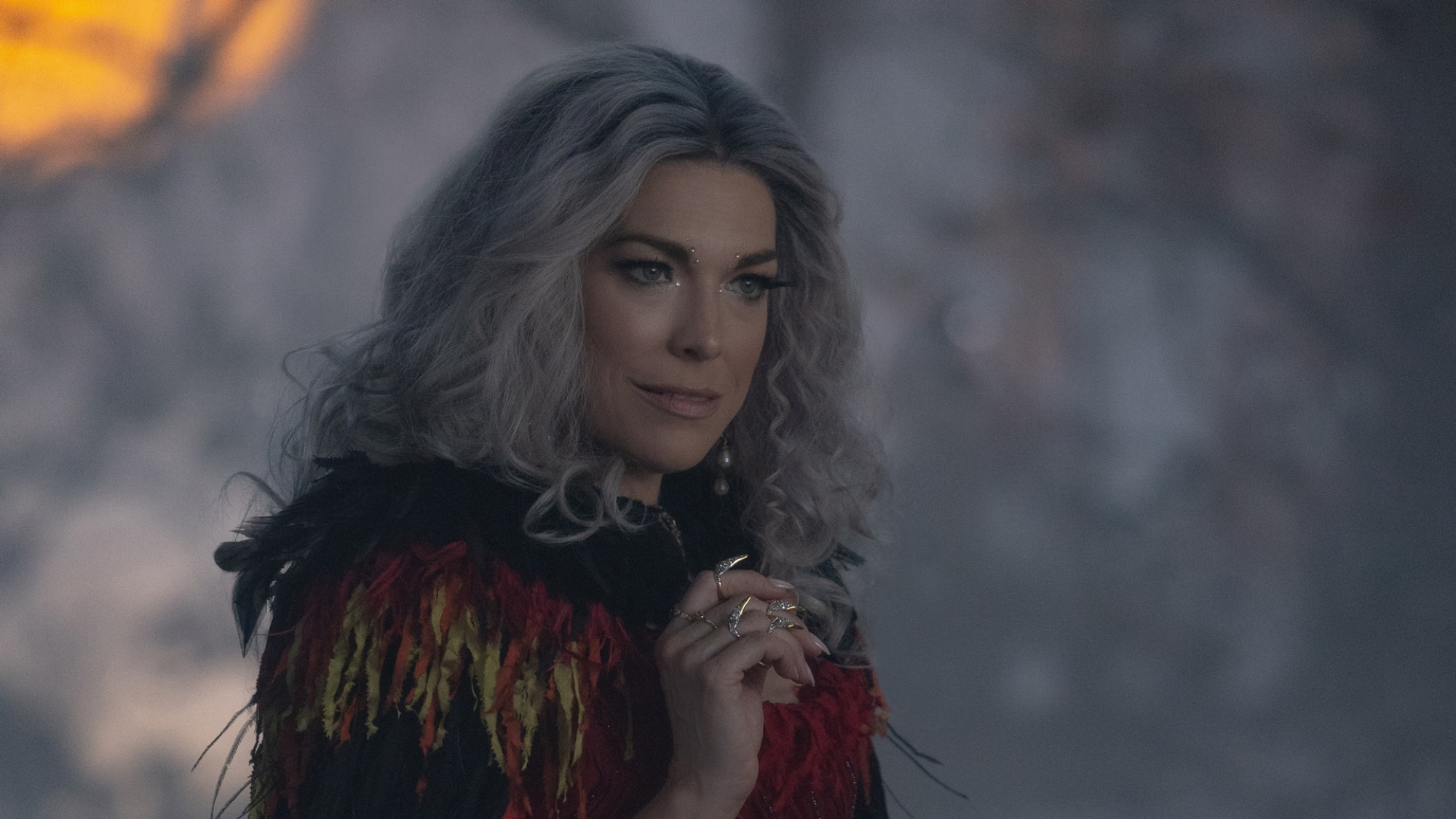 Sam Richardson is perfectly cast as Sanderson Sisters superfan Gilbert, who runs the magic shop that’s taken over the old Sanderson house (it was a museum run by Allison’s mother in the 1993 original). Richardson’s expert comedic pausing, perpetually noope energy, and delightfully nerdy enthusiasm is one of the film’s absolute strengths. 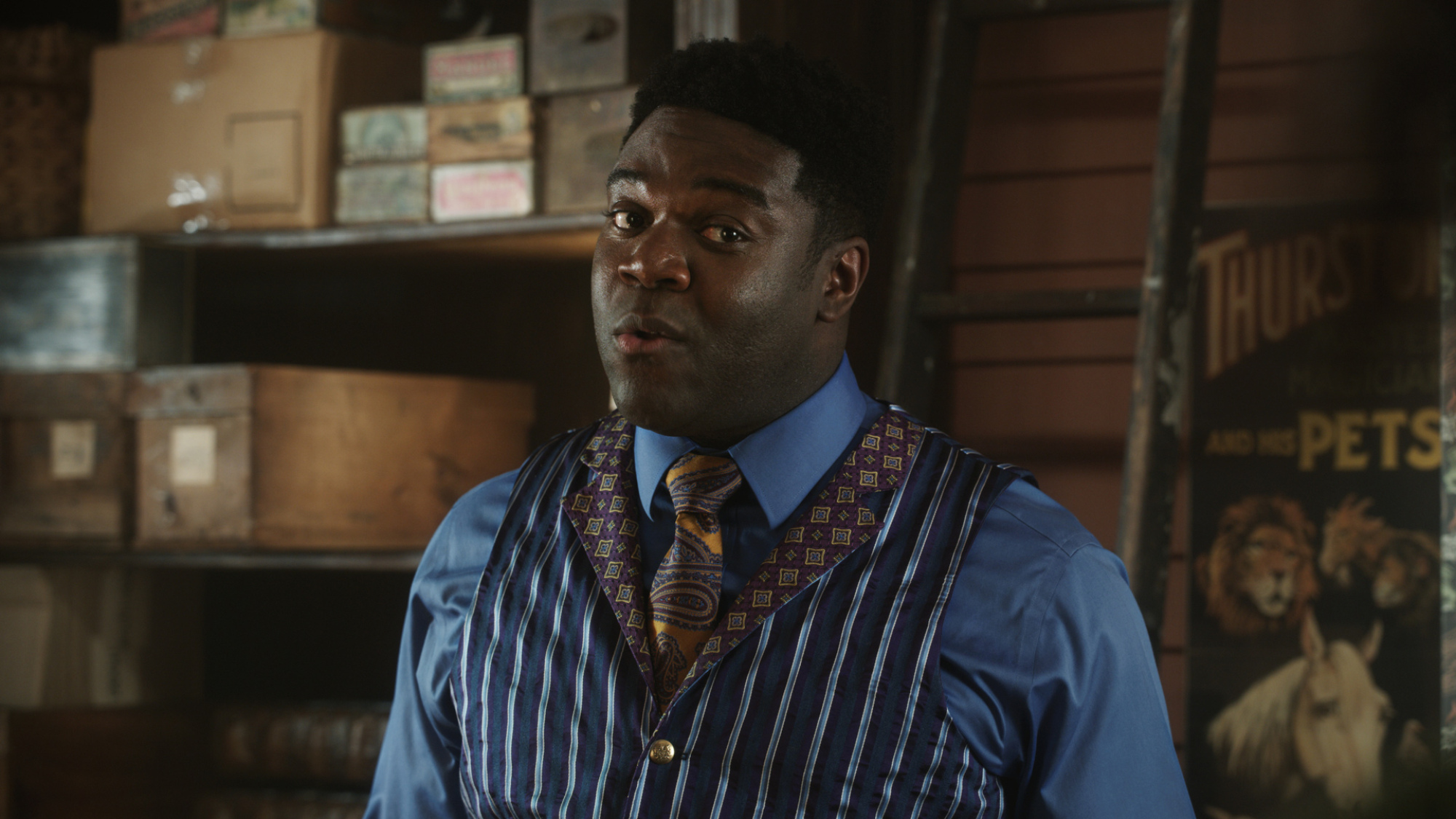 And then there’s Tony Hale, doubling up as both Salem's present day Mayor Traske and Sanderson sisters-hating Reverend Traske of 17th century Salem. Hale brings perfect small town politician and Friend’s Dad energy to the film as Cassie’s dad and the mayor; he laughs way too long at non-jokes and gets overwhelmingly emotional about the carnival return of the caramel apples of Sandy’s Candy Cauldron — watching Hale scornfully brandish his sad, store-bought version shouldn’t be as funny as it really, really is.

Dragging the '90s back from the grave

Hocus Pocus 2’s obvious nostalgia factor is an audience double-whammy, satisfying the millennials and Gen-Xers who rented it religiously on VHS from Blockbuster in the ‘90s, and Gen-Z fiends living for the ongoing ‘90s resurgence. Two ravens with one stone, if you will. Beyond the Tumblr aesthetic rampaging across TikTok, ‘90s-style film and TV horror hits continue to smash it out of the park, from Netflix’s Fear Street trilogy based on R.L Stine’s teen series to the 2020 The Witches reboot, in which Anne Hathaway had wicked fun reimagining Anjelica Huston’s iconic role. The Munsters, Hellraiser, Firestarter — horror reboots are everywhere, but Hocus Pocus sits in the more family-friendly-spooky-rather-than-scary camp.

There’s a cauldron full of nods to director Kenny Ortega’s original film too, from the return of “maggot museum” and “good zombie” Billy Butcherson, to the opening overhead flying shot that sails into Salem, and the protective power of a circle of salt. Some references are less necessary than others, including a meta moment when Winifred flies past a couple watching the original Hocus Pocus on TV. Fletcher also keeps in line with the original film’s savvy use of Disneyland-worthy special and visual effects, whether fog and wind machines, shuddering floorboards, bubbling enormous glowing cauldrons, or candles that explode into illumination.

Essentially, the film feels like something worthy of a Blockbuster in 1993 and a cinema or streaming service in 2022.

The power of three will set you free

At its core, Hocus Pocus 2 pushes the importance of sisterhood above all, with Waddingham's witch of the forbidden woods declaring early in the piece, "A witch is nothing without her coven." Both in a narrative sense and using the chemistry between the two trios, Midler, Najimy, and Parker mirror the same complicated bond as Peak, Escobedo, and Buckingham, learning as Izzy says, "Power is meant to be shared."

"A witch is nothing without her coven."

As the Halliwell sisters always said in witchy ‘90s cornerstone Charmed, "The power of three will set you free."

Hocus Pocus 2, quite simply, was worth the wait, as a rare reboot/sequel that capitalises on the beloved magic of the original while letting its core stars spectacularly lean into the chaos, whirling, cackling, and yowling as gloriously as they did 29 years ago. When the credits roll on Hocus Pocus 2, we are dust! Toast! Pudding! Dost thou comprehend?