PREORDER: Kirby’s Return to Dream Land Deluxe is slated for a Nintendo Switch release on Feb. 24, 2023. In the meantime, you can reserve a copy at Amazon, Best Buy, GameStop, Target, and in the My Nintendo Store for $59.99.

Our favorite plump pink puffball is making another return to Dream Land — this time on the Nintendo Switch.

Kirby’s Return to Dream Land Deluxe ($59.99) is an upcoming remake of the side-scrolling platformer that originally launched on the Wii console back in 2011, setting the Kirbster and his friends off on a quest to collect lost ship parts after an alien crash-lands on Planet Popstar. Though it doesn't come out until Feb. 24, 2023, preorders were live at Amazon, Best Buy, GameStop, Target, and in the My Nintendo Store at the time of writing.

SEE ALSO: Our favorite games of 2022 so far, from 'Elden Ring' to things not called 'Elden Ring'

Dream Land Deluxe gameplay will involve Kirby's classic Copying Abilities, including a new Mecha Copy Ability that arms him with a laser beam (!), and support up to four players at once. Some fine print: It's not online multiplayer, so you'll each be playing on a single Switch system with separate Joy-Cons.

If you need a break from slurping and sword-fighting enemies, you and your crew can duke it out in a series of subgames — "Samurai Kirby" makes an appearance again alongside new ones like "Magolor’s Tome Trackers." 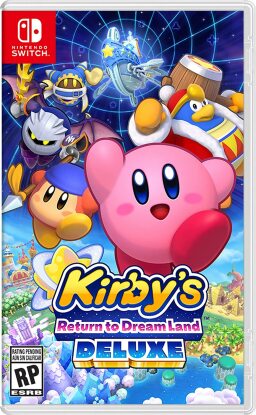