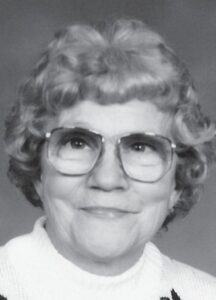 Edythe Otto Thom, 96, of Cavalier and formerly of Neche, passed away Sunday, Sept. 11, 2022, at Lutheran Sunset Home in Grafton.

Edythe E. Beckmyer was born June 26, 1926, in Germany to George and Sophie (Shering) Beckmyer. In 1928, she immigrated with her family to Shellbrook, Saskatchewan, Canada where she grew up. She married Laurence Otto on Nov. 14, 1942, in Canada. They moved to the United States in 1958 and made their home in Neche. She moved to Cavalier in 2002 and later became an American citizen. She was the caretaker of Christ Lutheran Church in Neche for 43 years. In the 1960s, she had an in home daycare. She later worked at a daycare. She also operated a successful painting and catering business.

She was preceded in death by her parents; husband; and daughter, Patricia.