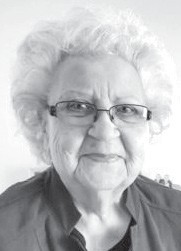 Maxine Lorraine Westberg was born March 18, 1933, on a small farm near Fairdale to the late Lewis and Gina (Tollefson) Westberg. She was the fifth of six children. She grew up in the Fairdale and Adams areas, attending country schools and graduating from Adams High School. After graduation she began working for her sister, Irene, in the Lankin Café where she met her future husband, Nick.

Maxine and John “Nick” Nicolai Sveen were united in marriage on March 15, 1951, shortly before Nick went to Korea with the U.S. Army. While Nick was overseas, Maxine attended Mayville Teachers’ College and obtained her teaching certificate. She taught country school until Nick returned from serving in Korea. They lived in Wisconsin for a short time before returning to the farm in Edinburg where they settled and started their happy family. They lived on the farm together until July 2022, when health issues and hospitalization led to their move to the Good Samaritan Society. They celebrated 71 years of marriage in March of 2022.

Maxine was a member of Trinity Lutheran Church and WELCA, American Legion Auxiliary and the Red Hat Society. She loved being a mother, a farm wife and friend; but her most treasured role was grandma and great-grandma.

Maxine will be dearly missed by her husband, Nick; children: Dan (Ann) Sveen, Edinburg, Debbie (Greg) Stone, Fargo, Pam (Fred) Halliday, Grafton, Janelle Davis, Grafton, Lori (Ken) Jerstad, East Grand Forks, Minnesota, and Jeff (Rita) Sveen, Edinburg; 19 grandchildren; and 31 great-grandchildren with another on the way, all of whom were her pride and joy.

Tollefson Funeral Home of Edinburg is in charge of arrangements.