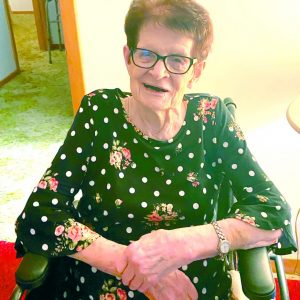 Bernice Bengtson, 101, went home to be with our Lord Jesus Christ, on Thursday, Sept. 8. She passed away at home with her daughter, Kris, by her side.
Bernice was born on Nov. 17, 1920, in Pembina, N.D., to William and Olga (Wilwand) Kain. She was one of five children. She grew up on a farm just outside of Pembina until she was about 12 years of age. The family then moved to just south of Northcote, Minn., where they attended the Presbyterian Church and used to go to hymn sing-a-longs there on Tuesday evenings. The family then moved to just north of Lancaster, Minn., and then later, southeast of Lancaster. She attended school in Pembina, Hallock and graduated from Lancaster in 1938. She worked at Robertson Drug and was working there up until her marriage to Arthur L. Bengtson on Nov. 8, 1941. They met in 1940 sometime. They immediately went to the Detroit, Mich., area for Arthur to work in the Ford factory. Of course, WWII got the U.S. involved on Dec. 7, 1941, and the factory switched over to artillery, etc.
Art and Bernice came home to farm on the family farm in the spring of 1942. Their son, Kendal, was born Jan. 23, 1943, and their daughter, Kris, was born on March 4, 1949. Bernice worked at the Farmer’s Store for nearly 12 years while their children were in school. She was also out on the farm running machinery and taking out food to the men. They started going to the Phoenix, Ariz., area in 1974 and until the spring of 1996. After that they were in the Burnsville, Minn., area in the wintertime. They were with their son and daughter.
Her husband, Arthur, passed away on Aug. 11, 2003, and their son passed away on Jan. 7, 2009. She was then home in Hallock all the time from September 2009 until the time of her death. She was blessed with two grandchildren, Susie and Matthew in 1979. Later, four great-grandchildren and three (triplet girls) great-great-grandchildren.
She was an excellent seamstress, sewing for herself and her daughter, as well as shirts for the men. A good cook as well. She and her husband were active in the Lutheran church in the 40s, 50s and 60s. Dad and Mom were members of the Presbyterian church from the 1970s until 2017 when she could no longer attend. She had good health, just tired and ready to go home to Heaven to be with her Lord, Dad and Ken, and many others.
She is survived by her daughter; two grandchildren; four great-grandchildren and three great-great-grandchildren; a brother, Kenneth Kain of Thief River Falls, Minn.; and nieces and nephews.
She was preceded in death by her parents; husband; son; a brother, Earl; and two sisters, Marjorie, and Marilyn.
Funeral services are scheduled for Monday, Sept. 26, 2022 at 11 a.m. in the First Presbyterian Church, Hallock. Interment will be in Greenwood Cemetery, Hallock. Visitation will be held at the church for one hour prior to the service. Rev. Marge Landwehr, presiding; Diane Younggren, organist and Galen Nordin, soloist. Casket bearers will be Jeff Nelson, Daniel Nelson, Luke Nelson, Lance Nelson, Matthew Bengtson, Kevin Klein, Scott Klein and Susie Peplinski.
Austin Funeral Chapel, Hallock, is in charge of the arrangements. www.austinfuneralchapel.com.