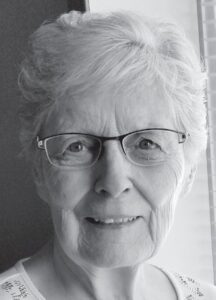 Joan passed away peacefully to be with the Lord on Sept. 8, 2022, at Edgewood Vista in Brainerd, Minnesota, with family by her side.

Joan was born the eldest child of Clyde Kieley, North Dakota State Senator, and Agnes (Brusseau) Kieley on Dec. 23, 1936, in Grafton. Joan has one sister, Kaye, married to Jim McFarland.

Joan graduated from Grafton High School in Grafton. In May of 1958, she earned her teaching degree from the College of St. Scholastica in Duluth, Minnesota. Joan taught home economics in Hibbing, Minnesota, to begin her career.

Joan is preceded in death by her parents, Clyde and Agnes; husband, Bill; and her sons, Mark and Tom.

Joan grew up a North Dakota girl and it never left her heart! She and Bill resided in Roseville, Minnesota, for many years before they purchased The Escape Resort near Ely, Minnesota. The resort is now a YMCA family camp. Joan also spent several years living in Woodbury, Lakota, Wasilla, then returned to Grand Forks, before moving to Brainerd in 2017.

Joan had a strong and intentional personal relationship with our Lord, Jesus Christ. A faithful Catholic from birth, Joan maintained a rich personal prayer life and lived her faith in service to others. Even in her later years living in memory care, Joan always showed concern and a caring attitude toward those around her. People surrounding Joan will always remember her grace, humor and spunky spirit.

Joan and the Cossette family will always be grateful to the open arms of the people in the Brainerd Lakes Catholic churches as well as the staff at Edgewood Vista. Their prayers and support have eased the difficult journey in Joan’s final years with dementia.

Joan never knew a stranger and the light of the Lord was always shining through her. She had a quick wit, easy sense of humor and always showered her love and support upon her family and friends.

Visitation and a prayer service will be held Thursday, Sept. 15,, from 5-7 p.m. at Brenny Funeral Chapel in Baxter, Minnesota. Friday, Sept. 16, visitation will be at 10 a.m., praying of the rosary at 10:30, with a Mass of Christian Burial at 11, all at St. Andrew’s Catholic Church in Brainerd. A luncheon will follow in the social hall.

At a later date, she will be laid to rest in Grafton with beloved family members who have preceded her in death.

In lieu of flowers, the family requests that donations in memoriam be made to Edgewood Vista for staff support, Seminarian Fund in the Diocese of Fargo or Brainerd Lakes Catholic Church Youth Faith Formation via St. Andrews