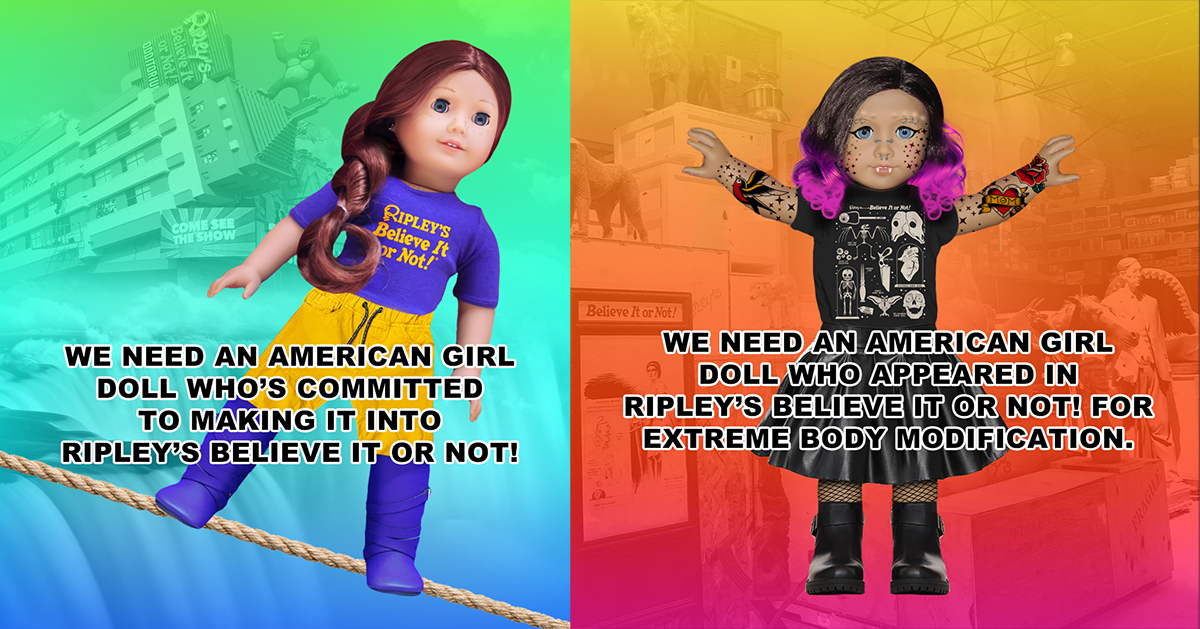 We need an American Girl doll who deep dives into every weird story she comes across on the internet. Oh wait, that’s us!

Unless you’ve spent the last months off the grid somewhere in the mountains or the middle of the Sahara, you’ve likely witnessed the rapid resurgence of America’s favorite dolls in the form of memes.

Take a quick look through Instagram and you’ll find several American Girl stan accounts, but none more popular than @hellicity_merriman, the brainchild of 27-year-old digital strategist Barrett Adair and her anonymous sidekick.

Origins of “We Need an American Girl Doll Who…”

The duo began posting general AG-themed memes to a niche audience back in February 2022 but recently catapulted into the mainstream with their adaptation of “We need a Disney princess who…”-style memes of years past featuring hot takes on modern politics, commentary on Zellennial culture, outfit report cards, and obscure historical references that didn’t make it into the pages of your favorite doll’s books.

While OG Horse Girl Felicity Merriman gave us a glimpse of American Revolution drama and Kirsten Larsen taught us about pioneer times (and flower crowns), we’d pay big money for an American Girl who danced ’til she dropped during the Dancing Plague of 1518.

Unfortunately, these quirky girlies can’t be found in stores, but their stories can still be told! Grab your doll of choice and hunker down as we go behind the memes into some of the strange happenings American Girl missed out on.

The Great Michigan Pizza Funeral of 1973 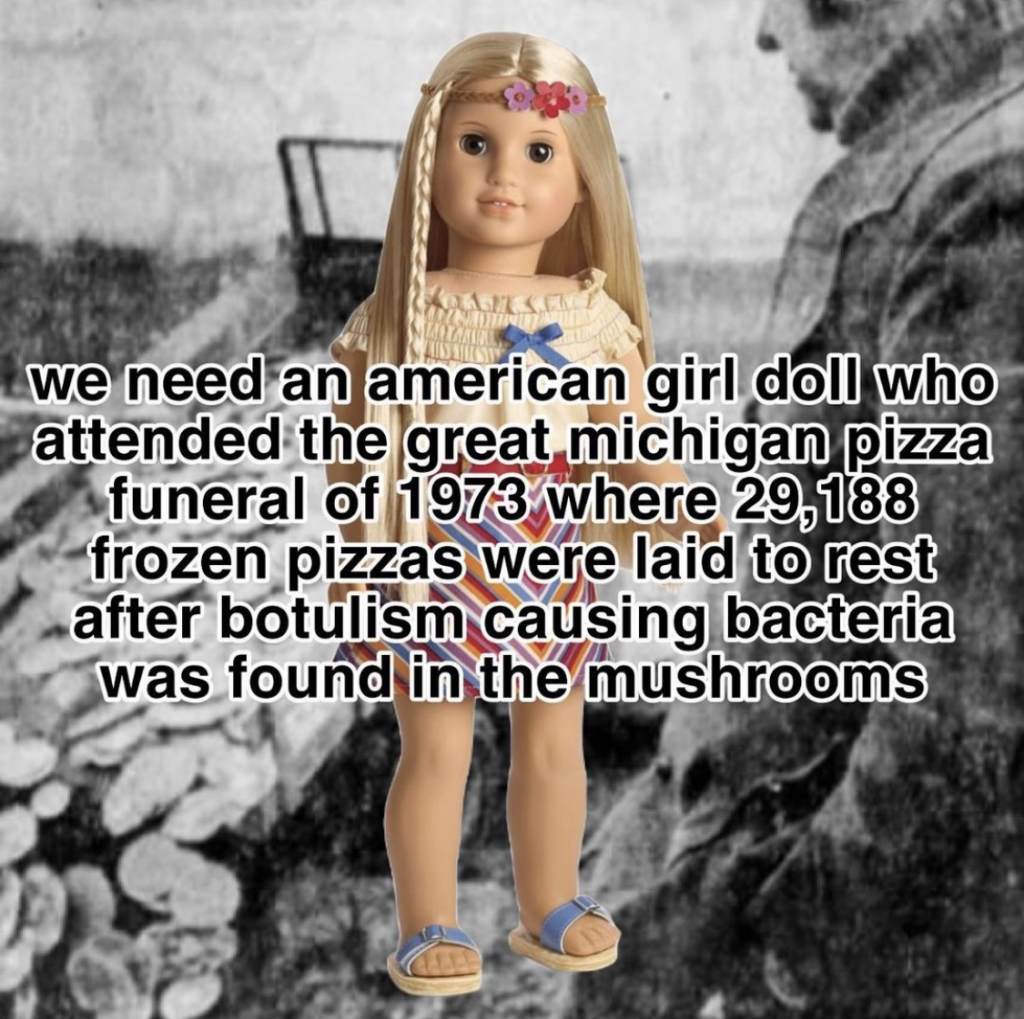 There’s no use crying over spilled marinara — unless you’re holding a funeral for approximately 30,000 botulinum-filled frozen pizzas.

In January 1973, employees of Ohio’s United Canning noticed their mushroom tins were looking a little bloated. Upon closer inspection, it became clear that the swollen cans were contaminated with the botulism-causing bacterium. The FDA implemented a mass recall on all products containing the funky ‘shrooms, including Papa Fabbrini’s Frozen Pizzas.

On March 5, dozens of people, including the company’s owner Mario Fabbrini and then-governor William G. Milliken, gathered at an Ossineke, Michigan, farm to bid farewell to the dearly departed pizza pies as pickup trucks lined up to dump them into an 18-foot grave.

Fortunately for Fabbrini, all was not lost for his American Dream. He served attendees mushroom-free slices after marking the botched batch’s final resting place with a two-toned garland made of red gladioli for his family’s sauce and white carnations for the cheesy goodness. 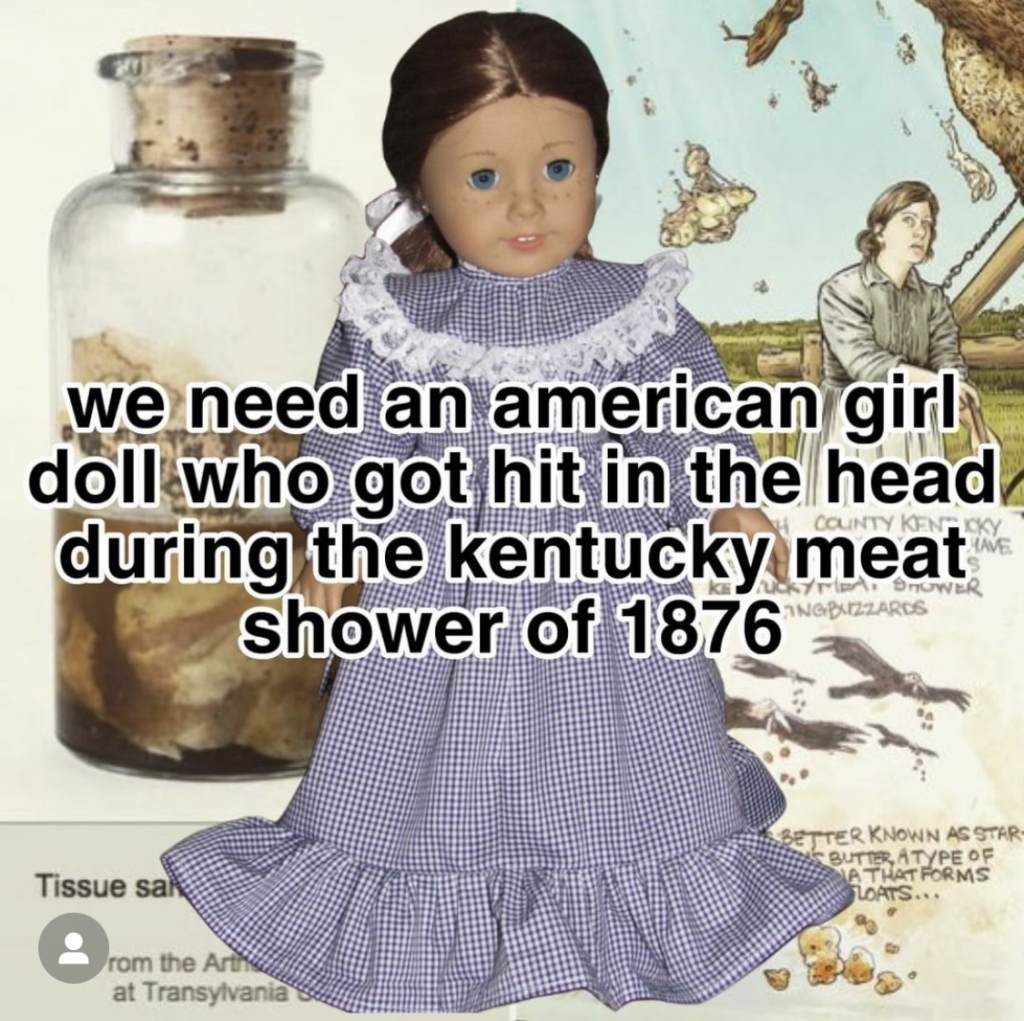 While stories about fish, frogs, crabs, and other creatures falling from the skies have been noted for millennia, one historic downpour has a bit more meat to its story.

On March 3, 1876, a housewife near Olympia Springs, Kentucky, was spending a sunny day making soap on her farm when enough chunks of meat to “fill a horse wagon” started raining down from the heavens.

There was no question that the event occurred after the woman’s husband, Allen Crouch, maintained that the meat fell around her “like large snowflakes.” Harrison Gill, who visited the next day, noted seeing large, spoiled pieces of flesh covering the property and sticking out of fences.

Despite studies of preserved pieces of flesh from the event and two men of questionable tastes swinging by to sample the fallen meat, its actual source remains unconfirmed to this day.

The best theory running, however, is that rather than an animal self-destructing in the sky, it’s likely that the meat shower resulted from a spooked vulture vomiting up its lunch. Delicious!

Learn more about the meat-eorlogic mystery! 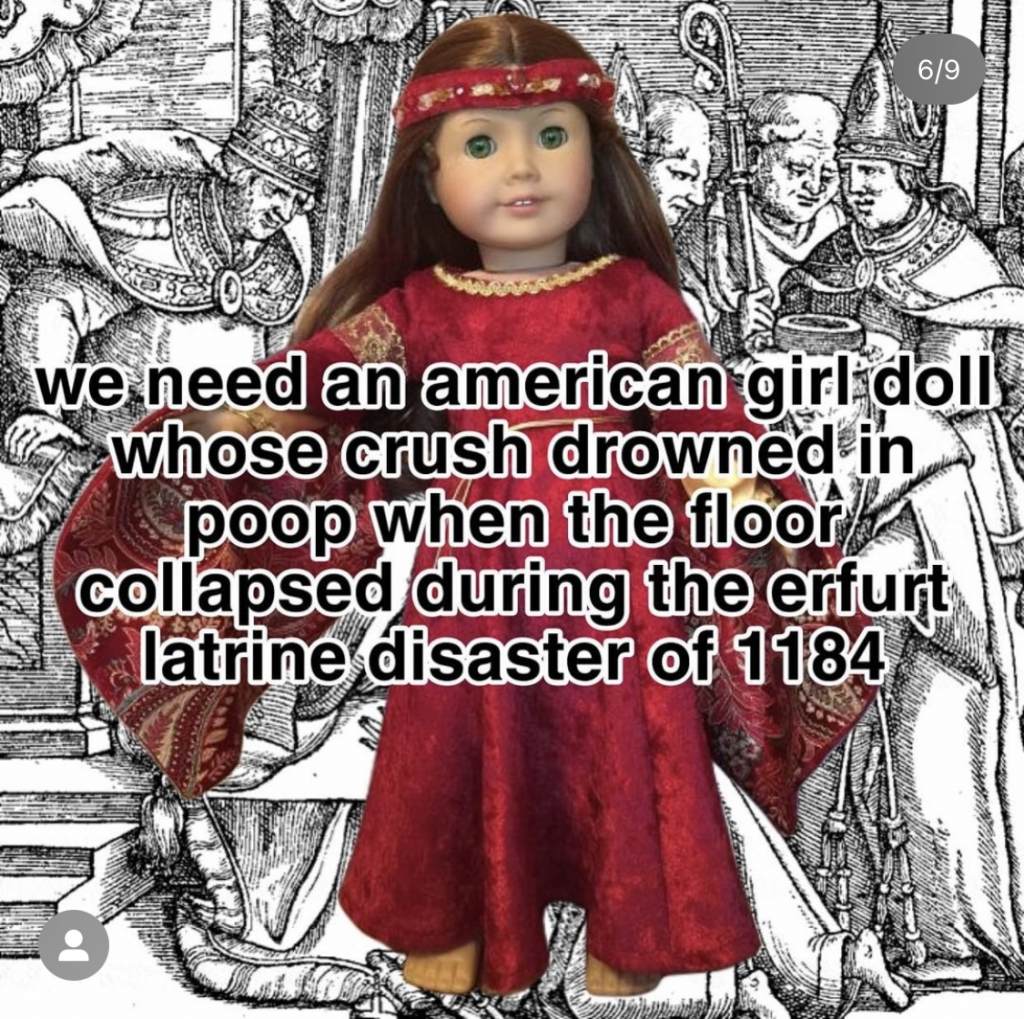 Of all the ways to go, we doubt death by excrement is high on anyone’s list.

In July 1184, King Heinrich VI called upon nobles near and far to gather at St. Peter’s Church, located in Erfurt’s Petersburg Citadel (in modern-day Germany), in an effort to solve a land dispute between Ludwig III, the Landgrave of Thuringia, and Conrad of Wittelsbach, Archbishop of Mainz.

While Henry VI was busy assessing the weight of the conflict, he forgot to factor in the strength of the church floors, which collapsed from the mass of body weight and chainmail worn by attendees, plunging 60–100 of Europe’s elite into the latrine below, where they drowned in a pit of monk poop.

History’s biggest potty debacle didn’t flush away Europe’s troubles, though, as the three key players weren’t among those who drowned. They had migrated to another room to debate privately when the infrastructure crumbled. 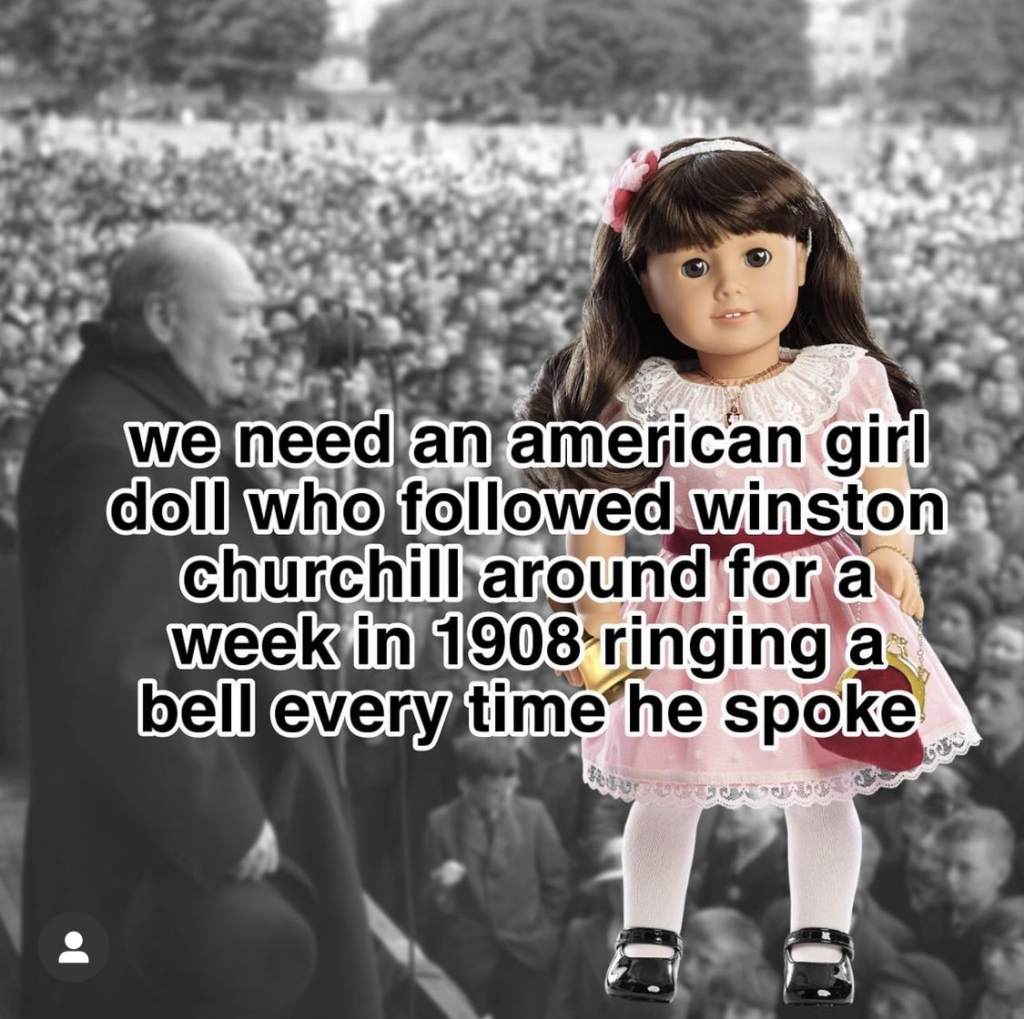 The year was 1908, and 34-year-old Winston Churchill had a lot to say while hitting the campaign trail to regain his seat in Parliament — but Irish suffragette Mary Maloney wasn’t having any of it.

The Women’s Freedom League activist followed Churchill around Dundee, Scotland, for a full week demanding that he apologize for remarks he made against the women’s suffrage movement.

In a true “if you can’t say anything nice” moment, Winny refused to apologize, to which Maloney responded by ringing a large hand bell, drowning him out every time he tried to give a speech.

Churchill ultimately gave up, saying, “If she thinks that is a reasonable argument, she may use it. I don’t care. I bid you good afternoon.” 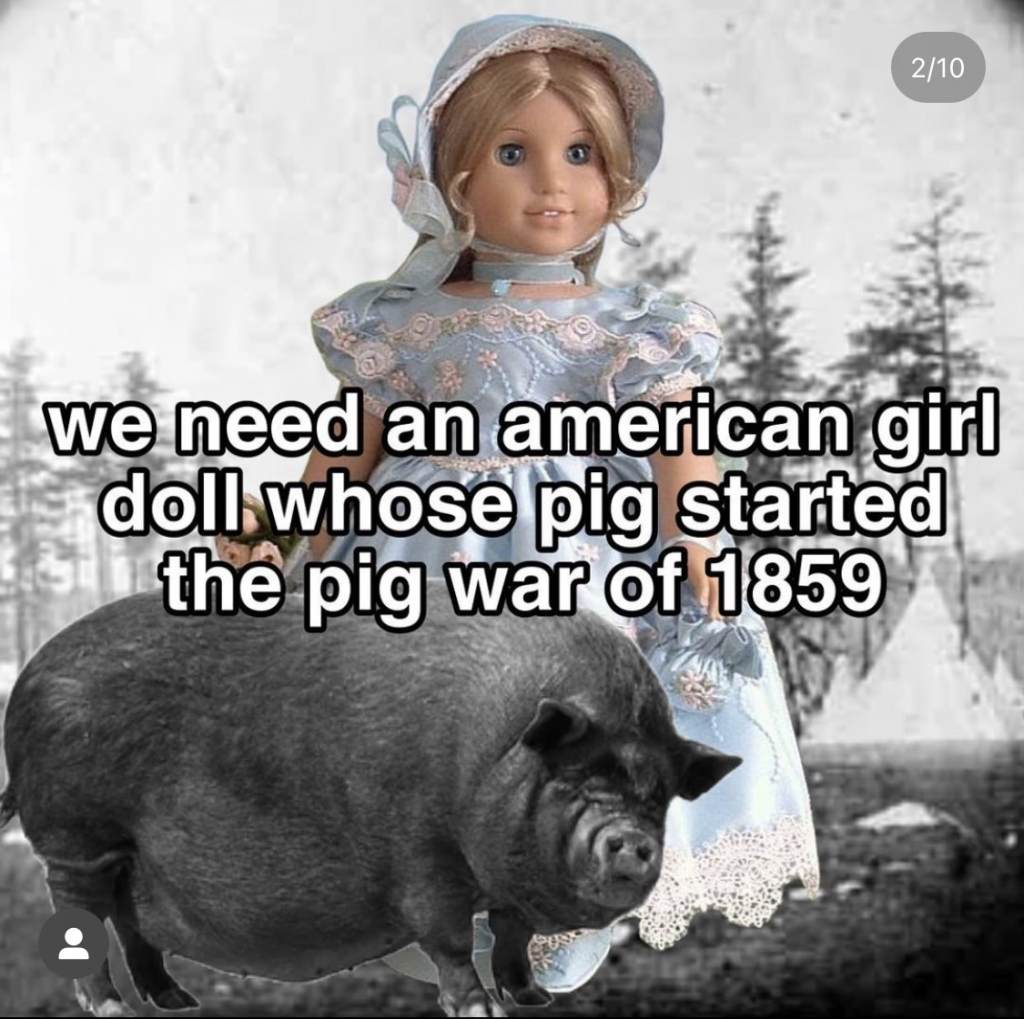 An American, a Brit, and a pig meet up on an island…

In what sounds like the setup for a truly awful joke, the scenario above was actually the beginning of a 13-year-long war with our neighbors to the north. Buckle up, because this one’s a doozy.

In 1846, the U.S. and Britain signed the Oregon Treaty, officially determining the 49th parallel as the U.S./British-American (now Canadian) border between the Rocky Mountains and Pacific coastline. Only one issue remained — the line cut straight through a cluster of islands off the coast of Vancouver, specifically the strategically important San Juan Island, which sat at the mouth of the channel.

The simple solution was mutual sovereignty with people from both countries settling in and living peacefully. That is, until June 15, 1859, when a wandering British-owned pig got a hankering for potatoes and picked the wrong farm to snack from.

American farmer Lyman Cutlar saw the pig destroying his crops and shot it in a fit of rage. When the pig’s owner, Charles Griffin, confronted Cutlar about the murder, it did not go well.

Despite Cutlar offering Griffin $10 for his impulsive decision, Griffin reported Cultar to British authorities. American locals were not impressed and called in the might of the U.S. Military for protection via a petition that landed on openly anti-British general and commander of the Department of Oregon William S. Harney’s desk.

In response, British Columbia’s governor, James Douglas, sent three British warships to the channel leading to a month-long stand-off during which both sides increased their military presence.

When Admiral Robert L. Baynes, Commander-in-Chief of the British Navy and the Pacific arrived on the scene, Douglas requested for troops to land on the island and engage with the U.S. infantry. A natural voice of reason, Baynes responded that he would not “involve two great nations in a war over a squabble about a pig.”

In the meantime, higher-ups at the nation capitols had gotten wind of the escalating situation and were equally confused over how a single pig could cause such a ruckus. The nations immediately began negotiating, quickly deciding that neither side would have a presence of over 100 men on the island until a more formal agreement could be made, with the British taking the north side of the island and Americans in the south.

That formal agreement took a bit longer than anticipated, and it wasn’t until 1872 that an international commission determined that the island would fall entirely under U.S. control.

These days, both camps can still be found at the San Juan Island National Park, which marks the only U.S. national park where a foreign flag is hoisted as a sign of friendship (and perhaps as a reminder that no pig is worth a war).

Thanks for the Meme-ories 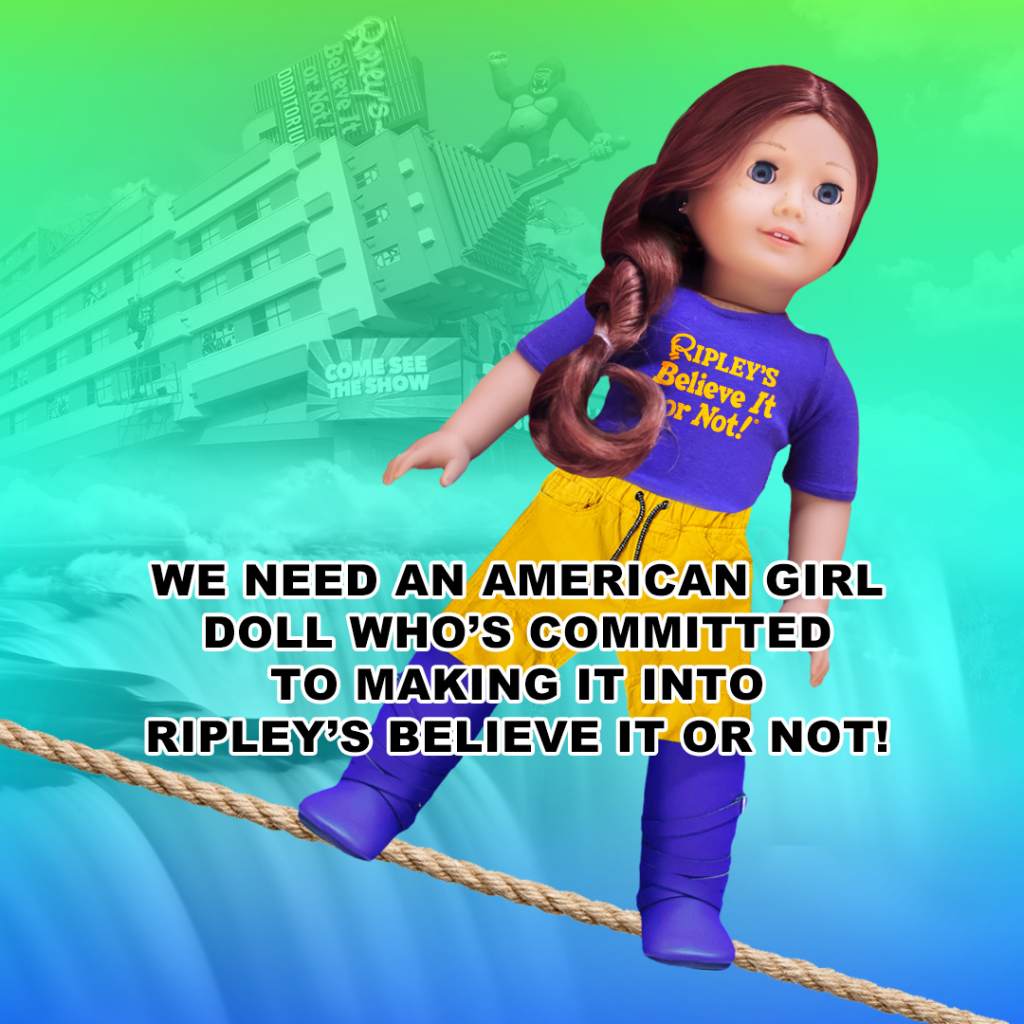 Of course, we couldn’t resist making a couple American Girl doll memes of our own! We think these gals would be right at home next to Samantha Parkington and Kit Kittredge. After all, many of the folks we’ve featured have overcome challenging obstacles in pursuit of their dreams — much like American Girl doll characters. 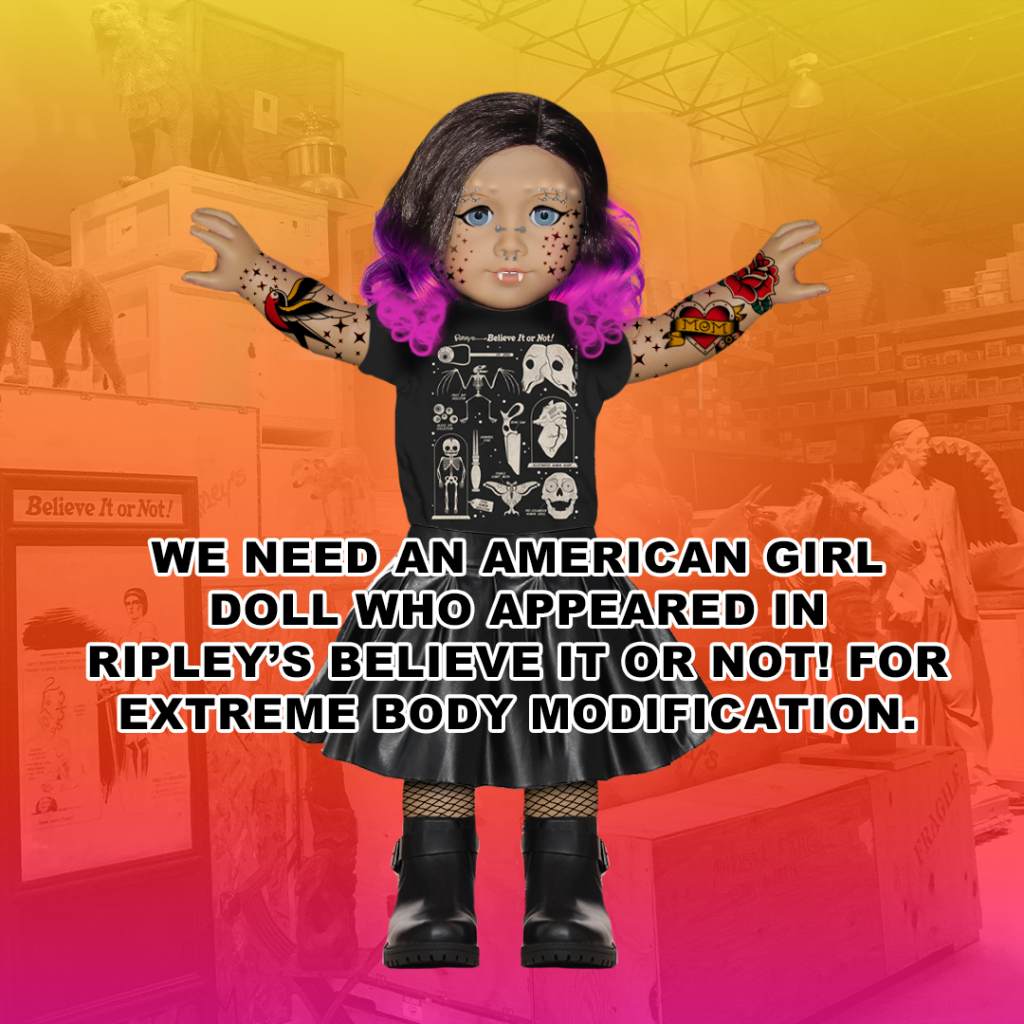 Let us know which obscure historical references or bizarre facts have shown up in your favorite memes that you’re dying to know more about!