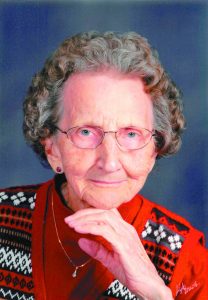 Helaine A. Ingeman, 99, of Litchfield, Minn., formerly of Grove City, Minn., passed away Saturday, June 25, 2022, in Litchfield.
Helaine Ann (Carlson) Ingeman, the daughter of Andrew and Ellen (Nordin) Carlson, was born Sept. 4, 1922, in Tegner Township, rural Kennedy, Kittson County, Minn. She was baptized in September of 1922 and confirmed on Sept. 13, 1936, at Maria Lutheran Church in Kennedy. She graduated from Kennedy High School. Helaine was united in marriage to Lavern Ingeman on Aug. 6, 1944, and they were blessed with four children, Ronnie, Sandra, Jerry and Tim.
Helaine helped build air gliders during World War II. Later she worked alongside her husband at their service station. Her primary focus, and most rewarding for her, was raising her children and caring for her family. Her faith was important to her, and she was a longtime member of Trinity Lutheran Church and involved in WELCA. In addition, Helaine was active in the community, volunteering her time and talents to Meeker County Hospital Auxiliary and the Grove City Area C.A.R.E. program. She loved to bake, read and embroider. Helaine looked forward to a good bus trip and was willing to go anywhere, anytime.
Helaine is survived by: her children, Ronnie Ingeman of Atwater, Minn., Sandra (Jerry) Jackson of Baraboo, Wis., Jerry (Karen) Ingeman of Monticello, Minn., and Tim Ingeman of St. Cloud, Minn.; eight grandchildren; seven great-grandchildren; siblings, Clarence Carlson of Crookston, Minn., and Franklin Carlson of Hallock, Minn.; sister-in-law, Eunice Carlson of Racine, Wis.; and other loving relatives and friends.
She was preceded in death by: her parents; husband; siblings, Donald, Allen, Clifford, Phyllis, James and Barbara; and daughters-in-law, Berdelle Ingeman and Diane Ingeman.
A funeral service will be held Thursday, June 30, 2022, at 11 a.m. at Trinity Lutheran Church in Grove City. A visitation will be held one hour prior to the service at the church. Interment will be at Immanuel Lutheran Cemetery in Grove City. Please sign our online guestbook at www.johnsonhagglund.com.
Memorials may be given to Trinity Lutheran Church or Grove City Area C.A.R.E. Program.