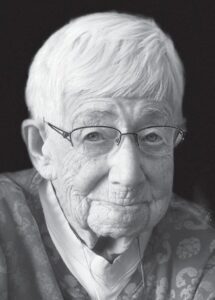 Alice, daughter of William and Pauline (Krumpos) Nowek, was born July 26, 1918, at her father’s homestead in St. Joseph, Montana. At a young age, the family moved to Conway, and Alice graduated from the eighth grade at Conway Public School. During World War II, Alice worked at various jobs in the state of Washington.

Alice returned to Conway and was united in marriage to Elmer Kotaska on Oct. 23, 1945, at St. Mark’s Catholic Church. They established their home in Conway and later moved to Ryder for two years, and then moved to Mylo. While living in Mylo, Alice worked as a nurse’s aide at the Rolette Hospital. Elmer passed away March 24, 1972.

After Elmer’s death, Alice moved to Devils Lake, completed her GED and graduated from a practical nurses program in January of 1974. She worked as an LPN at Mercy Hospital and served on the North Dakota State Board of Nursing. She semiretired in January 1985 and assisted with home health care until completely retiring in the 1990s. In 2008, Alice moved to Bismarck to be closer to family.

Alice’s Catholic faith was very important to her and wherever she lived she was active in the church. While living in Devils Lake she was a member of St. Joseph’s Church, sang in the choir, served with St. Elizabeth’s Circle of the Altar Society, and was a member of the Legion of Mary and Catholic Daughters of the Americas. While living in Bismarck she played organ at the Marillac Manor Chapel and volunteered at St. Alexius Hospital.

Alice was the recipient of several special awards, including Who’s Who in America in 1984 and St. Alexius Hospital for being the oldest volunteer at 91.

In her spare time, Alice enjoyed reading, doing crafts, playing the organ, listening to music, coloring, writing letters and poems and watching or listening to a Minnesota Twins game.

Services were held at St Joseph’s Catholic Church in Devils Lake Friday, Sept 3, at 10 a.m. Visitation was Thursday, Sept. 2, from 5-7 p.m. at Gilbertson’s Funeral Home. Rosary was at 7 p.m.