Odd 4 days ago Ripley's Believe It or Not! » Weird News 8

When it comes to the final resting places of celebrities, weird fan traditions and paranormal activity are just the beginning. Some stars, like Marilyn Monroe, continue to attract other celebrities to join them in the afterlife. Others, like Jim Morrison, bring out the worst in their “fans”—grave desecration, graffiti, and satanic rituals. Then, there are the persistent rumors that the “King of Rock” isn’t dead at all, which have led to many flesh-and-blood Elvis sightings.

Of course, nobody knows these stories better than the employees who care for famous people after their deaths, celebrity crypt keepers. Keep reading for true tales from the crypt, featuring the strange, improbable happenings at cemeteries where stars lie.

On August 5, 1962, Marilyn Monroe died from an apparent suicide by drug overdose. Three days later, her body was interred at Westwood Village Memorial Cemetery in a modest crypt in the Corridor of Memories. Her ex-husband, baseball legend Joe DiMaggio, handled her funeral arrangements.

He chose Westwood because it was the final resting place of Monroe’s surrogate mother, Ana Lower, and her childhood guardian, Grace Goddard. He also appreciated the fact that Westwood was not a celebrity cemetery. DiMaggio restricted her funeral service to a small handful of the star’s most beloved associates and friends. And he had red roses delivered to her grave three times per week for the next 20 years. 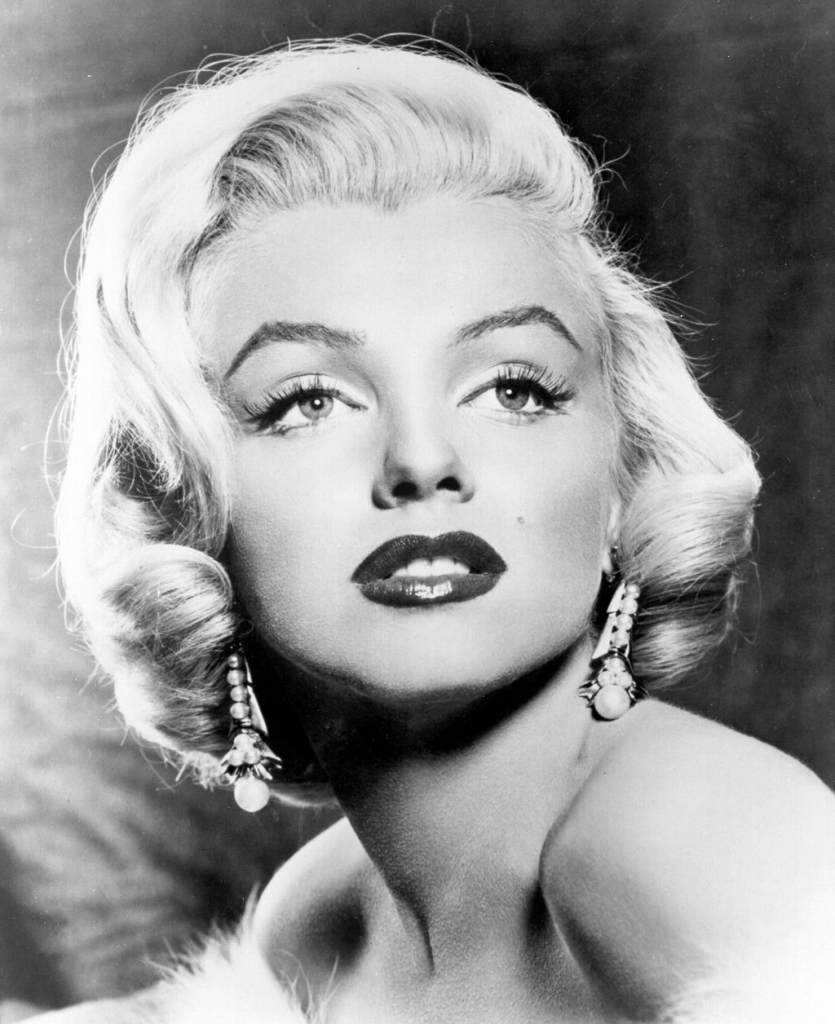 Of course, a lot has changed since the actress and model’s funeral. Her final resting place has attracted many fellow celebrities over the years, including Dean Martin, Rodney Dangerfield, Jack Lemon, and Frank Zappa. In 1992, Hugh Heffner bought the tomb next to Marilyn’s, determined to pass eternity with Playboy’s first Playmate. Richard Poncher, who owned the crypt above Marilyn, was even buried face down so that he could stare at her in the afterlife. His widow has since removed his remains and auctioned off the crypt.

According to cemetery staff, Westwood Memorial Park is not a tourist attraction. As a result, they don’t pass out maps of headstone locations. And when the families of Hollywood stars come to pay their respects, staff don’t hesitate to turn away tourists who might disrupt these private visits. 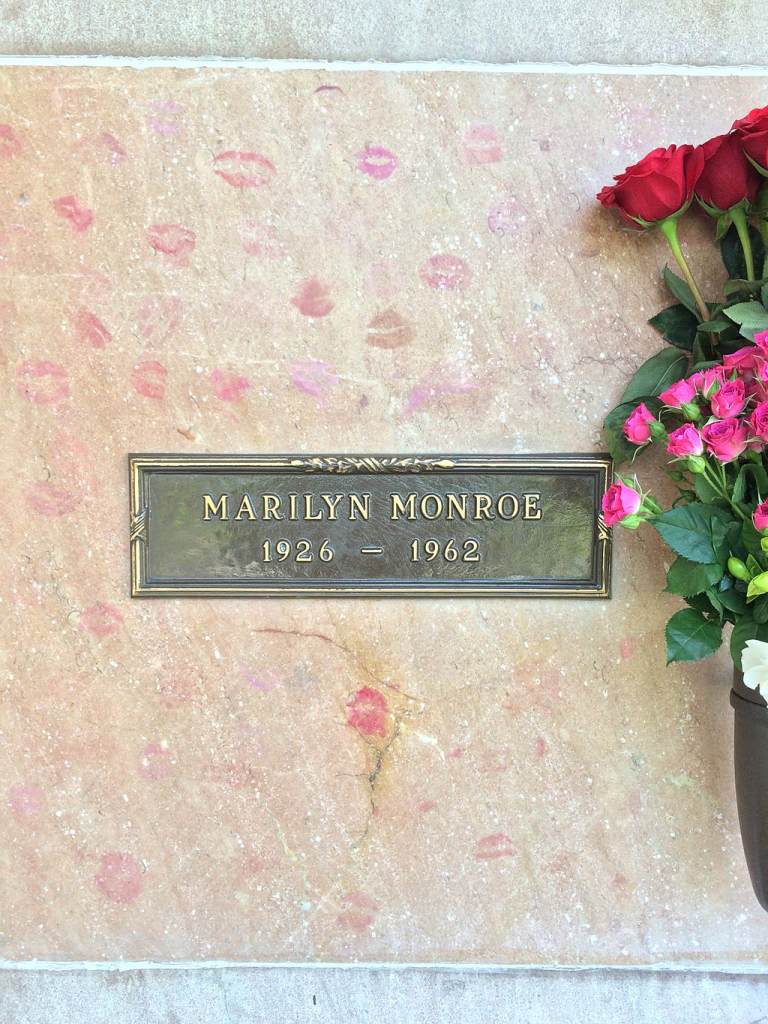 Nonetheless, Marilyn’s crypt is easy to distinguish. It’s covered in red lipstick prints left by diehard fans as well as gifts of flowers and stuffed animals. Over the years, many visitors have reported seeing a pink mist while at her grave. Some believe this mist is the spirit of the beloved blonde. Of course, people spot her ghost in a variety of other locations throughout Los Angeles, too. These include the Brentwood bungalow, where she passed away, and the Hollywood Roosevelt Hotel, one of her favorite “haunts” in life. Because of the many sightings, she’s even earned the posthumous title, “the hardest working ghost in Hollywood.”

Père Lachaise Cemetery in Paris represents a necropolis par excellence, encompassing 98 acres and 70,000 burial plots. Of course, this particular “city” houses some of the most famous figures in Western history. These include Oscar Wilde, Honoré de Balzac, Frédéric Chopin, Colette, and Edith Piaf.

Remember Woody Allen’s Midnight in Paris? If the folks in this cemetery came back to life, they’d throw a party to rival anything Owen Wilson saw. Of course, there’s one resident that continues to cause trouble—Doors frontman, Jim Morrison. 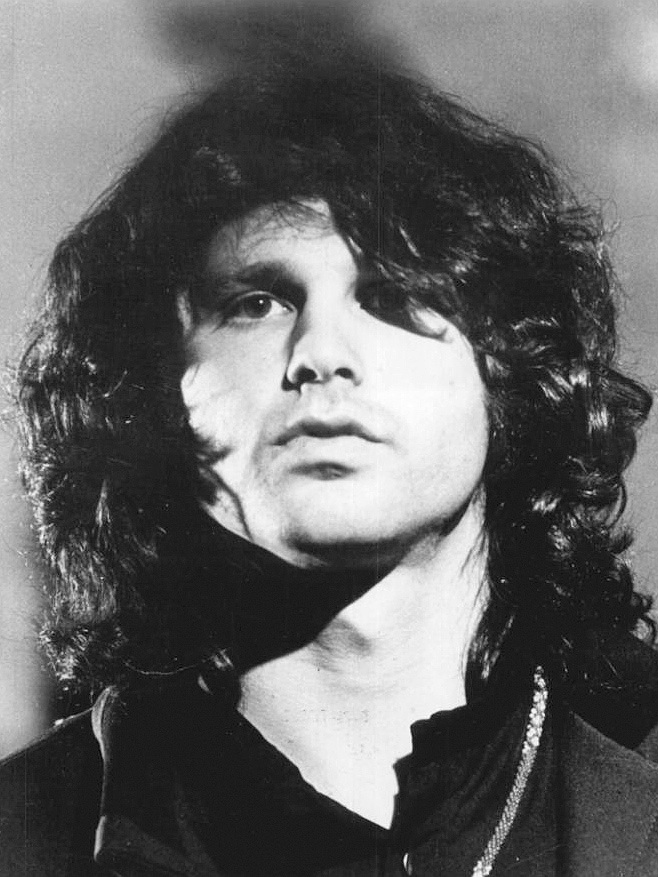 Despite his abrupt death on July 3, 1971, Jim still attracts an endless multitude of hippies, nomads, and anarchists. You can recognize them by the six-packs of beer under their arms, joints, and disheveled appearances. And despite Père Lachaise’s endless list of interred literary luminaries, famed war generals, and renowned composers, Jim gets all the attention.

But according to those who work at the cemetery, this attention is both unwarranted and unwanted. Workers report an endless array of unsavory behavior at the grave, from illicit trysts with prostitutes to Black Masses and drug parties. Fans have defaced his gravestone more times than can be counted. One worker even recalls a violent graveside riot requiring police intervention in 1991, the 20th anniversary of the songwriter and poet’s death. 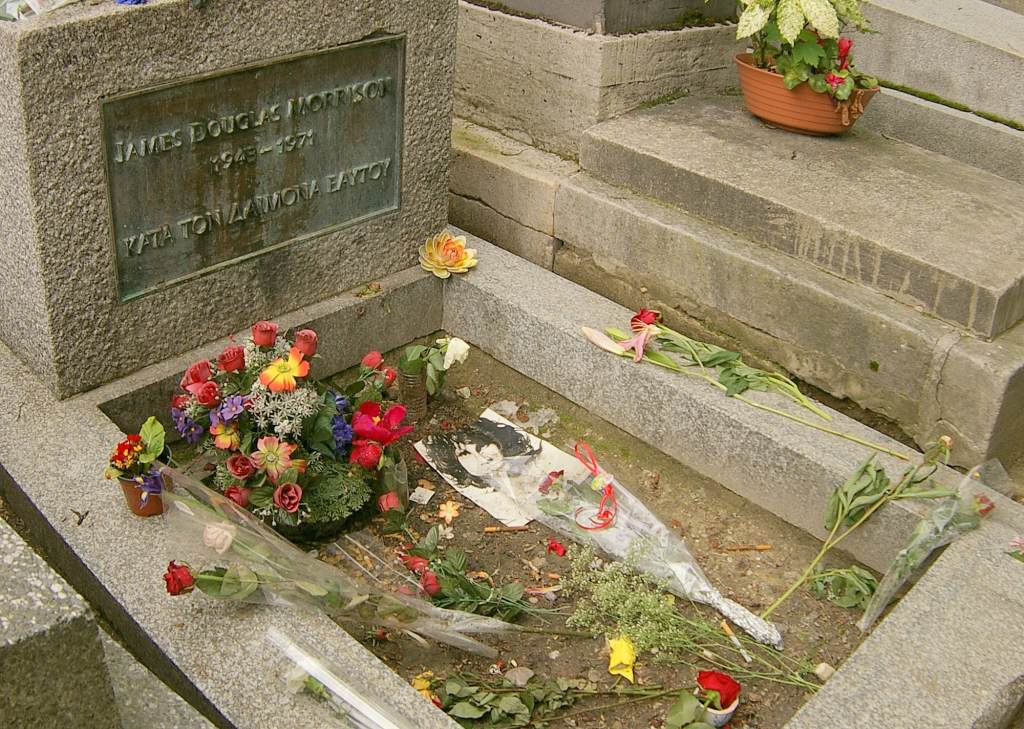 Among the most fascinating paranormal activity associated with Jim’s grave is an eerie photo taken in 1997 of rock historian Brett Meisner. Meisner didn’t notice the ghostly blur in the background of the photo until 2002. He sent it to a team of researchers for verification. The researchers ruled it “unexplainable” and in no way manipulated. That said, the verdict’s still out on whether or not Jim broke on through “to the other side.”

Rumors of a “faked death” swirled around Jim Morrison shortly after his passing, and these stories sometimes get rekindled by the tabloid press even today. But nobody continues to excite as much speculation and controversy as Elvis Presley. After his shocking death on August 16, 1977, Forest Hill Cemetery, Memphis, Tennessee, became Elvis’s final resting place—next to his mother, Gladys. But his fans, quite literally, would not leave him be. 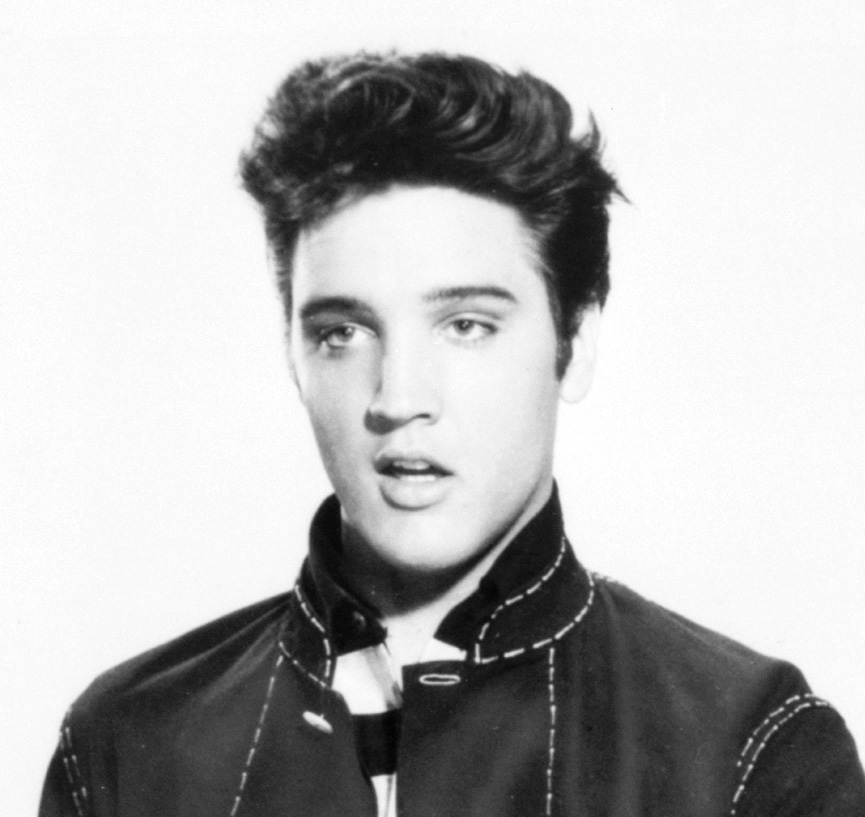 Potential grave robbers also got in on the action, forcing Elvis’s father, Vernon, to have the bodies of the “King of Rock” and Gladys exhumed and reburied at the Meditation Garden at Graceland. Today, Graceland also marks the final resting place of Vernon, Minnie Mae Presley (Elvis’s maternal grandmother), and Jesse Garon (Elvis’s stillborn twin brother). Priscilla Presley, Elvis’s ex-wife, wants to be buried there, too, so that she and Elvis can spend eternity together. Priscilla even claims to have regular communication with her ex-husband from the spirit realm.

According to staff at Graceland, fans bring flowers, photos of the king, stuffed animals, American flags, and other keepsakes to leave at his grave. Approximately 600,000 people visit each year. As you can imagine, this means plenty of clutter. Today, staff remove flowers once they wilt, and mementos get cleared daily. 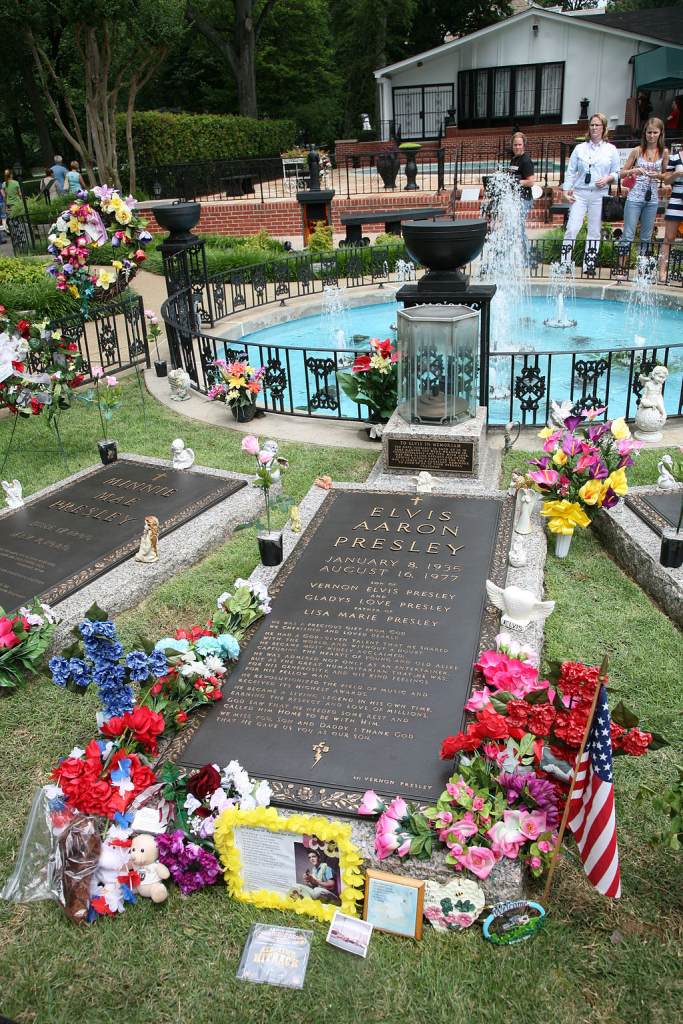 Nonetheless, many diehard fans still refuse to believe “the King” is dead. While there are some reports of orbs and other paranormal activity at Graceland and Elvis’s gravesite, flesh-and-blood rumors prove more common.

Some claim a 55-year-old Elvis even made a guest appearance in the 1990 film Home Alone. And a more recent photo of a man with a white beard visiting the Meditation Garden has caused quite a stir. Many believe it’s a still-living Elvis visiting his grave on his 82nd birthday. In other words, the most loyal and hopeful of Elvis fans only visit the Meditation Garden in the hopes of catching a glimpse of him alive and well today.