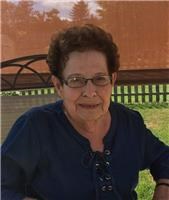 Emily Marie Stainbrook, 83, a lifelong Crookston resident passed away at Mayo Clinic Health System-Mankato with her family at her side on Wednesday evening, March 31, 2021, after a brief illness.
Emily was born in Tilden Township near Crookston on March 14, 1938 to Henry and Lucille (Demarais) Snyder. Henry and Lucille both passed away when Emily was very young and she was raised in a very loving home by her sister and brother-in-law, Lorraine and Gale Regan of Crookston. She was baptized and confirmed at the Cathedral of the Immaculate Conception, attended Cathedral Grade School, and graduated from Cathedral High School with the Class of 1956. For the next year Emily worked as a clerk for the Municipal Court of the City of Crookston to earn tuition money for nursing school. She earned an Associate Degree in Nursing from Crookston's Bethesda School of Nursing and graduated as an LPN in 1958. On November 29, 1958 Emily was united in marriage to Roger W. Stainbrook at the Cathedral. Their union would be blessed by the births of five children – Laurie, Diane, JoAnne, Kay, and John. Sadly, John passed away on November 25, 1990.
Emily was employed as a nurse during her early years at St. Francis Hospital and Bethesda Hospital, which would become known as Riverview Hospital. Emily later owned and managed The Thimble for five years before becoming office manager and dental assistant for Dr. Harper Jung. She then returned to nursing and worked at the Villa St. Vincent. Emily also did the bookkeeping for Crookston Paint and Glass, which she and Roger owned until selling it and retiring in 1999. Sadness once again visited Emily's life with Roger's passing on August 19, 2001. Always wanting to stay busy, Emily became a foster grandparent for the Cathedral School, and later worked for Northwest Mental Health in the Northwest Apartments until retiring in 2010.
Emily was a devoted lifelong member of the Cathedral of the Immaculate Conception parish. She also was a member of the St. Anthony Circle, and sang in the Cathedral Choir and funeral choir for many years. She served as a volunteer at Mount St. Benedict and the Villa St. Vincent and belonged to the auxiliaries of the VFW as a lifetime member, and the Legion, and Eagles Aerie. Emily loved to sing and rarely, if ever, missed singing with the church choirs and sing-alongs for the residents of Villa St. Vincent. She enjoyed crocheting and cross-stitching, and lovingly crocheted blankets for all her grandchildren. Summers found Emily tending her beautiful flower gardens and keeping the lawn and grounds immaculate. This was something that she and Roger had enjoyed doing together for many years and where she felt his presence as the years passed.
Emily liked to play bingo and smear, and especially loved playing Skip-Bo with her grandchildren. Her life centered around her family and she was so proud of their many accomplishments. Emily will always be remembered for her spunk, zest for life, sense of humor, and a contagious laugh that could be picked out anywhere.
Emily leaves her four daughters – Laurie and Ranse Awender of Crookston, Diane and Jim Onken of Eagle Lake, JoAnne and Lynn Schroeder of Jamestown, N.D., and Kay and Keith (Chumbly) Oien of Crookston; 13 grandchildren – Ryan (Stephanie) Onken, Chad (Stephanie) Onken, Becky (Thomas) Hussong, Emmy Onken (fiancé, Ben Cason), Christopher (Amelia) Awender, Micheal Awender (fiancée, Jen Walton), Elizabeth (Josh) Weise, Marcus Stainbrook, Andrew Patton, Annabelle Patton, Angie Oien, John Oien, and Jacob Oien; and 10 great-grandchildren – Graham, Archer, Grace, Jackson, Lily, Ashton, Clyde, Otto, Annaleigh, and Addely. She is also survived by her sister, Ruth Thompson of Washington, Pa.; and in-laws from Roger's family – Cookie and Glenn French of Loveland, Colo., and Mary Tuseth, Virginia Stainbrook, and Dennis Stainbrook, all of Crookston; and several nieces, nephews, and friends. Emily's girls and their families are comforted knowing that their mother is now with her beloved husband, Roger, and son, John; and other family including her parents, Henry and Lucille Snyder; parents-in-law, Frank and Angeline Stainbrook; sisters and brothers – Lorraine (Gale) Regan, Annabelle Ayotte, Donald (Blanche) Snyder, and Joe (Leona) Snyder; and many from Roger's family. May the memory of Emily Marie Stainbrook be forever treasured.
Mass of Christian Burial for Emily will be celebrated at 1 p.m. on Friday, April 9, 2021 in the Cathedral of the Immaculate Conception in Crookston with The Very Rev. Vincent Miller presiding. Visitation will be at the Cathedral on Thursday, April 8, 2021 from 5-7 p.m., with a prayer service and the sharing of memories at 7 p.m. Visitation will continue Friday for one hour prior to the funeral. Both services will be livestreamed by logging on to www.crookstoncathedral.com, clicking on funerals/burials and then the prompt to watch. Interment will take place in the Calvary Cemetery, Crookston. The Stenshoel-Houske Funeral Home is assisting the family with funeral arrangements. Online registry and messages of condolence may be given at www.stenshoelhouske.com.