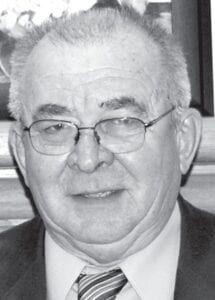 James Joseph Gudajtes was born Dec. 2, 1940, in Grafton, the first child of Edward and Marie (Slominski) Gudajtes. He attended grade school at St. Anthony’s School in Warsaw and graduated from Minto High School in 1959.

He joined the Army during peacetime in January 1960 and was stationed in Fort Ord, California, and Fairbanks, Alaska. He came back to work on the family farm after his honorable discharge in 1963. James wed Kathryn Kosobud in 1968 and lived in Minto before building a home in 1978 on the farm east of Warsaw where his grandparents, Frank and Florence Slominski homesteaded.

James’ passion was the farm and he rarely missed a day away from the shop. He was successful in recruiting his son, Anton, into farming as well and helped him every day, whether he was needed or not. Sometimes he was just looking for a card game with the guys. He loved having corn feeds and loved inviting neighbors or just the local ladies out for lunches at his shop where he dined them with food everyone else made for him. He rarely went fishing or took a trip as he would get lonesome from his daily socializing habits at the local cafes and bars. He made polish bologna yearly and loved collecting and driving his John Deere tractors in area parades. He loved pulling practical jokes: leaving goats, bunnies or roosters in many farmyards. He would end most of his days on the phone, calling his friends for the latest news. He never missed mass on the weekend and showed his respect at every funeral in the area.

Jim will be remembered for his hard-working attitude and being a friend to everyone. He was carefree, happy and quick to tell a story. His world famous fresh red “New Potatoes” he dug and sold all summer and fall kept him quite busy in his later years. He was famous for giving his children and grandchildren “tattoos” and buying them “pictures” (pull tabs) at the local bars, taking his grandchildren for rides with black licorice and ice cream at hand, bringing them back to their parents as dirty as possible. With his infectious laugh and guilty smile he would have you pull his finger, give a big “goose goose” and an “awho-awho” to go with it. If you had a nickname from Jimmy, you were highly regarded in his life.

Arrangements are with Amundson Funeral Home of Grand Forks.