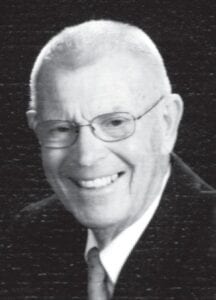 Jim was born in Backoo on July 9, 1930. After graduating from Cavalier High School, he served in the United States Navy for four years. He moved to Seattle, Washington, in 1957 with his wife, Clara of Grafton, and later settled in Enumclaw. Jim retired from Boeing after a successful 32-year career as a machinist.

Jim loved spending time with friends and family. He enjoyed camping, fishing, watching sports and doing projects around his and others’ homes. Jim was an active member of Trinity Lutheran Church. Upon retirement, he spent his winters in Arizona. In his final years, you would likely find him outside tending to his yard.

Jim is preceded in death by his mother, Ethel (Kuehner) Bill; his uncle and aunt, Admiral and Phoebe Geiger (who raised him once his mother passed); and his brother, Charles.

He is survived by his wife of 65 years, Clara (Thompson) Scott; his children, Susan Names (Kriss) and Randy Scott; three grandchildren; and four great-grandchildren.

A private family service will be held at Tahoma National Cemetery on Thursday, Jan. 7, 2021. As a member of the Veterans of Foreign Wars, one of his proudest moments was his May 2018 Honor Flight trip toWashington, DC. In lieu of flowers, the family requests that any memorials be given in Jim’s name to the Honor Flight Network, a non-profit organization that honors veterans. Online: http:// pugetsoundhonorflight.org/get-involved/donate/ or by mail: Puget Sound Honor Flight, PO Box 434, Grapeview, WA 98546.

Please share a memory of Jim on the tribute wall at www.weeksfuneralhomes.com.