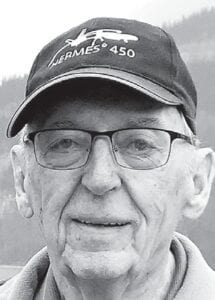 A private service will be held for immediate family with interment at Fargo National Cemetery.

E dwi n Joseph Osowski was born in Marshall Township to Leon and Cecelia (Smith) Osowski on Sept. 16, 1934. He grew up on the family farm near Stephen, Minnesota. In the late 1950s, he served in the U.S. Army 97th Anti-Aircraft Artillery Unit achieving the rank of Spec. 4. Upon returning home, he purchased the family farm where he settled. He and his family moved to Grafton in 1976. Besides being a farmer, he was also a pilot and rural letter carrier.

He was preceded in death by his parents; brother, Francis “Frank”; sisters: Gertrude Jopp, Blanche Rocksvold and Helen Jensen.