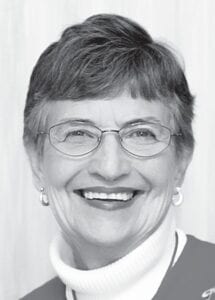 Lea grew up in Crookston, Minnesota, where she attended St. Joseph’s Academy. Being an early reader, the nuns determined she would skip first grade. Lea had a happy childhood, growing up with her three siblings and extended family during the Great Depression; she often said, “I never knew or felt we were poor.” Following high school graduation, Lea attended St. Catherine University in St. Paul, Minnesota, then was offered a scholarship to St. Joseph School of Nursing in Fargo where she completed her nursing degree. Shortly thereafter, she met the love of her life and soul-mate, James H. O’Keefe, Sr.

They wed Sept. 5, 1953, at St. Anne’s Catholic Church in Crookston. Jim and Lea had 50 wonderful years together before Jim’s untimely passing in 2003.

Lea worked as an RN to support Jim through law school at the University of North Dakota in Grand Forks. Lea and Jim settled in Grafton in 1957 where Jim established a private law practice. They remained there, unwavering in their love and loyalty to North Dakota and this community. Lea worked at St. John the Evangelist Catholic Church in Grafton as director of religious education and later as a long-time volunteer in the parish office. She was active in her neighborhood birthday club of 60-plus years, as a member of the board of directors at Lutheran Sunset Home, for various community fundraisers, boy/girl scout den mother and with her hobbies. She loved to spend time reading, sewing, knitting, gardening and baking for others.

Lea’s life mission and love was caring for her family. Together she and Jim raised six children: Kevin, James, Jr., Maureen, Georgiana “Gigi,” Kerry and Kathleen “Katie.” The family is so very grateful for two fun-loving yet disciplined, practical, frugal yet generous and caring parents: the quintessential mother and father!

Lea was a natural caregiver and looked after both her mother, Alice, and mother-in-law, Dorothy, for many years. Her community of many friends became like extended family to her. Her frequent acts of kindness and gentle nature endeared her to all whom she knew. Though graceful and loving by nature, Leatrice was also a strong, witty, smart woman with an extraordinary ability to uplift and bring about the best in all the lives she touched.

Lea loved to socialize with her extended family and friends and did so on a daily basis. She thoroughly enjoyed her happy hour while chatting, problem-solving and chuckling… on the phone or inperson. Her grown children loved to make the trip to Grafton to spend time with her— one or the other of us was with her in her cozy home most every day for the final year of her life.

Though Lea was a homebody in her later years, she traveled throughout the country and world with Jim during his time as a judge for the state of North Dakota and later once he retired. In recent years, she spent parts of the North Dakota winter with family at her son’s vacation home in Arizona.

Lea was an intuitive, spiritual person whose love and devotion to her Catholic faith were evident throughout her life, passed on to her from her mother and maternal grandmother. She will be sorely missed by many. Her sharp wit and mind remained completely intact to the end; she died of natural causes related to a chronic heart condition. As one life-long friend of the family said, “She went straight to Heaven, Jesus waiting!” It is hard not to imagine the immortal words from Matthew 24:21 being called to her as she passed: “Well done, my good and faithful servant!”

A funeral mass and celebration of Lea’s life will be held at St. John’s in Grafton at a later date, in late spring or early summer 2021. The family will be forever grateful for the outstanding care provided by the physicians and entire staff at Grafton’s Unity Medical Center and at Lutheran Sunset Home. In lieu of flowers, memorials may be directed to either facility.

Tollefson Funeral Home of Grafton is in charge of arrangements.