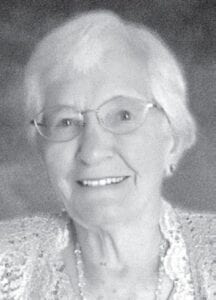 Antionette (Nettie) Marie Cicha was born on a farm in rural Lankin to Frank V. and Mary (Uhlir) Cicha. After graduating grade school, Nettie worked as a mother’s helper, working on various farms. One season she worked on a threshing crew as a cook on the Greicar farm where she met this tall charming man named Charles. They married July 27, 1936, in Pisek and started raising their family of eight. They lived and worked on the Greicar family homestead being the third generation to live there. Times were hard but working together, their strong faith helped them make a good life on the farm. Every year Nettie would have a large garden which she would spend her days canning vegetables to last through the harsh North Dakota winters. In 1969 the Greicar homestead was sold, so Dad built a house in Pisek, but retirement was not in the picture. They were hired by Walsh County as park managers of the Homme Dam. Charles and Nettie worked there for nine years, returning to Pisek to start retirement in 1979. Charles got sick with cancer and after fighting the big C for two and one-half years he left us in 1986.

Nettie continued to live in Pisek, keeping herself busy growing a magnificent flower and vegetable garden every year. She loved sewing and made many quilts. She crocheted many doilies which received blue ribbons at the Walsh County Fair. Nettie’s hands were never idle as she continued to crochet covers for clothes hangers. She continued mowing her own lawn until 98 years of age when her sons took her lawnmower and ladders so she wouldn’t climb on the roof to clear snow.

She devoted her life to her religion and was firm in her faith. Her pride and joy was her family. She was a hardworking, loveable woman with a kind, generous spirit. She loved playing the card game Kings in the Corner and usually won too.