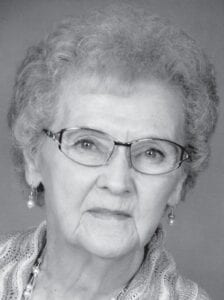 Adeline B. Gunderson, age 91 of Grafton, passed away Wednesday, Oct. 14, 2020, at Lutheran Sunset Home of Grafton.

Adeline B. Sunderland was born April 10, 1929, in Grafton to the late Oscar and Josie (Flom) Sunderland. She was raised in the Adams area and graduated from Fairdale High School. Adeline attended Mayville Teachers College, received her teaching certificate and taught school in Union and then at the Grydy County School. There she met John Hurtt who literally swept her off her feet as he landed his plane in the school yard and took her for a ride! Adeline returned to school to follow her dream of becoming a nurse. She attended Deaconess Hospital School of nursing and graduated with her registered nursing degree in 1951.

Adeline and John were united in marriage on Sept. 12, 1951, while John was on leave from the Army. She and John were stationed at Fort Hood, Texas, where she worked for Gatesville General Hospital before returning to North Dakota. Adeline worked for Deaconess Hospital in Grand Forks, then Deaconess and Unity Hospitals of Grafton, retiring after 40 years in nursing.They lived in rural Hoople where they raised their four children. After 49 years of marriage, John passed away in 2000.

Adeline reconnected with long-time family friend Winten Gunderson and they were married on March 20, 2012, at Grafton Lutheran Church. Winten brought Adeline and her family incredible joy and more family to love. They loved each other’s company and enjoyed their eight precious years together.

She was preceded in death by her parents; husband, John; infant brother, David; and sisters: Phyllis, Opal, Virginia and Gloria.

A memorial service will take place on, Sunday, Oct. 25, 2020, at 7 p.m. at Tollefson Funeral Home of Grafton. A walk through visitation will be from 5 to 7 p.m. at the funeral home. Due to COVID restrictions, masks will be required and social distancing guidelines will be followed.

Inurnment will be at Zion Lutheran Cemetery of rural Hoople, at a later date. In lieu of flowers, family suggests memorials to Grafton Lutheran Sunset Home, Unity Hospital, Zion Lutheran Church, Park River Bible Camp or a charity of your choice.

Tollefson Funeral Home of Grafton is in charge of arrangements.