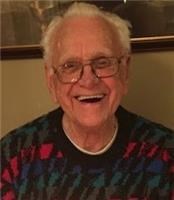 Roger "Rog" Helge Krogen passed away peacefully of natural causes August 31, 2020 at Sanford in Fargo. He was born in Crookston, MN on December 25th, 1927 to Arthur Krogen and Hilda (Graff) Krogen. Upon graduating from Crookston High School in 1946 he joined the Navy serving in the South Pacific. After an honorable discharge he moved to Minneapolis to attend Walker Art School. While in Minneapolis he began dating his to be lifelong sweetheart, fellow Crookston native Pauline. He accepted a job with the Santa Fe Railroad Company moving him to Las Vegas, NM. Polly followed shortly after and they were married, on January 13, 1951. Their next adventure took them to El Paso, TX where he had accepted a job with AT&T who he continued to work for for over 30 years. After their son Kyle was born they moved back to Minnesota and settled in Moorhead where they adopted their second son Daniel.

Roger was a very gifted craftsman, outdoorsman and was considered quite "techy" always learning, using and taking apart electronics. A lot of his spare time was spent building and fixing, often at Maple Lake at the family cabin. When they weren't at the cabin Rog and Polly enjoyed traveling, especially by car, and spending time with family and friends.

Roger is survived by his sons, Kyle of Salt Lake City and Daniel of St Peter, and granddaughters, Caty(Tommy) Smith, Kelsey Krogen, Kaitlyn Krogen and Kailey Smith. He was preceded in death by his parents, wife Pauline Bombardier Krogen; sisters Nadine Fournier and Audrey Scarr.

Visitation will be Tuesday, September 8, 2020, from 10:00 to 11:00 A.M., followed by the funeral service at 11:00 A.M., at Wright Funeral Home in Moorhead and interment at 4:30 P.M. at St. Joseph's Catholic Cemetery in Moorhead. There will be a live stream of the funeral service beginning at 11:00 A.M. on Roger's webpage at www.wrightfuneral.com. A Celebration of Life will also be held at a later date, due to the current Covid-19 situation.