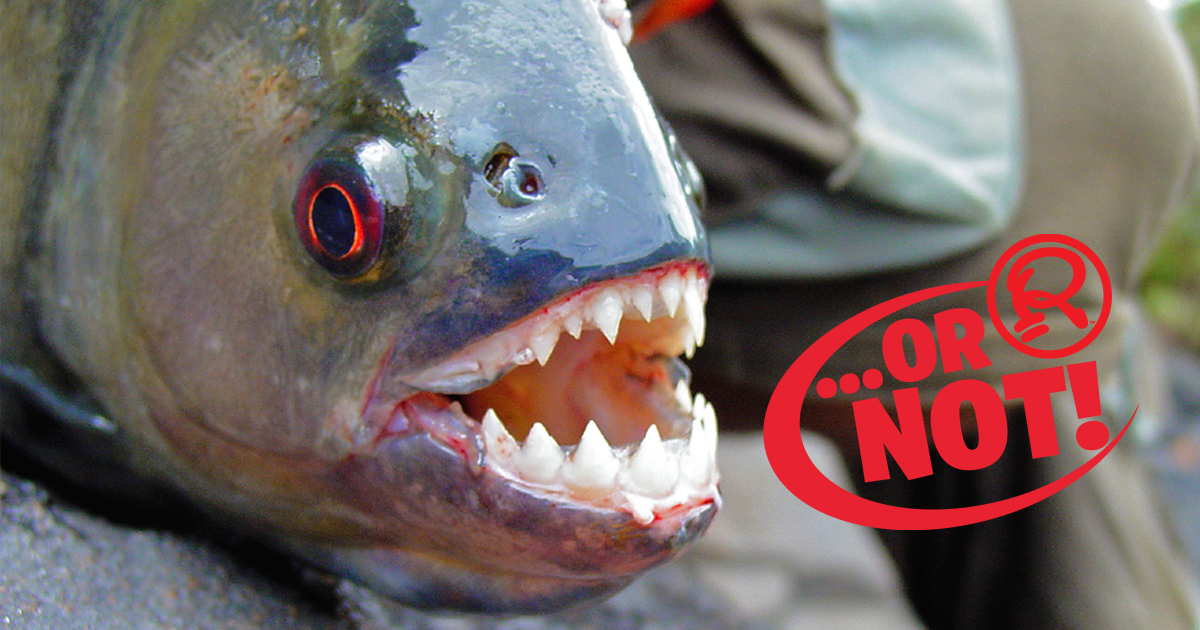 Who can forget Helga Brand’s demise? Eaten alive by starving piranhas in SPECTRE’s volcano lair during the Bond flick You Only Live Twice? Her death helped perpetuate the myth of piranhas as man-eaters. The fish’s razor-sharp teeth and ravenous “hunting” formations sealed the deal. Today, many people think of piranhas as the marauders of the Amazon, always on the quest for their next meal. If it’s “human?” So be it.

After sharks, alligators, and crocodiles, piranhas are among the most feared aquatic predators on the planet. But do these little guys deserve the bad rap? Let’s take a closer look at the hype associated with piranhas and whether it’s safe to get back in the water.

To say that misconceptions about piranhas exist is an epic understatement. A freshwater fish, they live in the rivers, floodplains, lakes, and reservoirs of South America’s Amazon basin. Although the total number of piranha types continues to expand as new ones get discovered, anywhere from 40 to 60 different species exist, classed in 12 scientific families.

Most inhabit single river systems. But others, like the red-bellied piranha, can be found in several.  Some piranha species coexist in the same waterways such as the Caño Maporal, a stream in Venezuela, that hosts seven.

Piranhas grow anywhere from five to 14 inches long. Some get even bigger, such as the red-bellied piranha, which can reach lengths of up to 20 inches. No matter the species, they’re distinguished by rows of sharp teeth in their upper and lower jaws. Menacing dentition, coupled with one of the strongest bites among bony fish, have helped secure the piranha its lethal reputation. 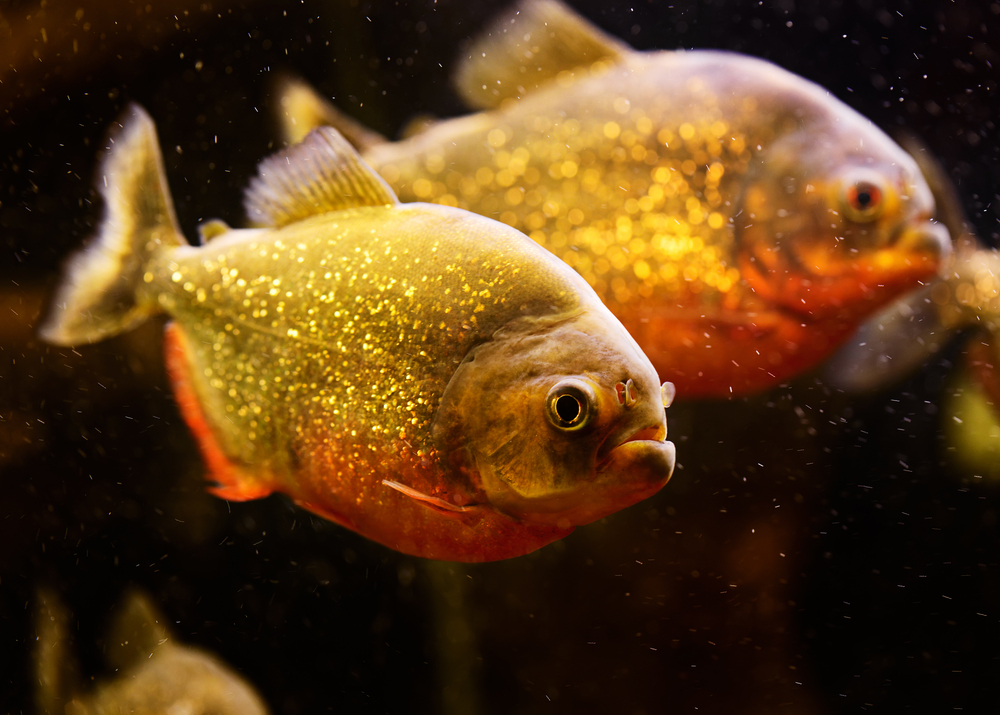 These facts beg a couple of questions. Just how fearsome are these fish in the wild? And can they render a flesh-and-blood human into a skeleton in a matter of minutes?

Dr. Herbert Axelrod wanted to get to the bottom of these questions once and for all. So, in an unorthodox move, he decided to experiment on himself. (Apparently, he had trouble locating volunteers.) The doctor waded into a pool filled with aggressive red-bellied piranhas wearing little more than swim trunks.

To the astonishment of many, Axelrod didn’t sustain a single bite. The same reaction happened when he waded into the water along with a hunk of fresh, bloody meat. Although the fish eventually devoured the bait, they left the doctor alone.

What does Dr. Axelrod’s research prove? Contrary to popular belief, piranhas are far from the velociraptors of the water. Instead, these toothy omnivorous (in some cases, vegetarian) fish prefer feeding on plant material, small fish, and worms. Large, living prey is off the menu. Why? Because, like other fish, piranhas remain preoccupied with getting eaten themselves.

What about their famous “hunting formations”? Far from organized massacres, piranhas swim in schools or shoals to protect themselves from predators. And they’ve got many to watch out for. Predators include river dolphins, caimans, various bird species, and humans. 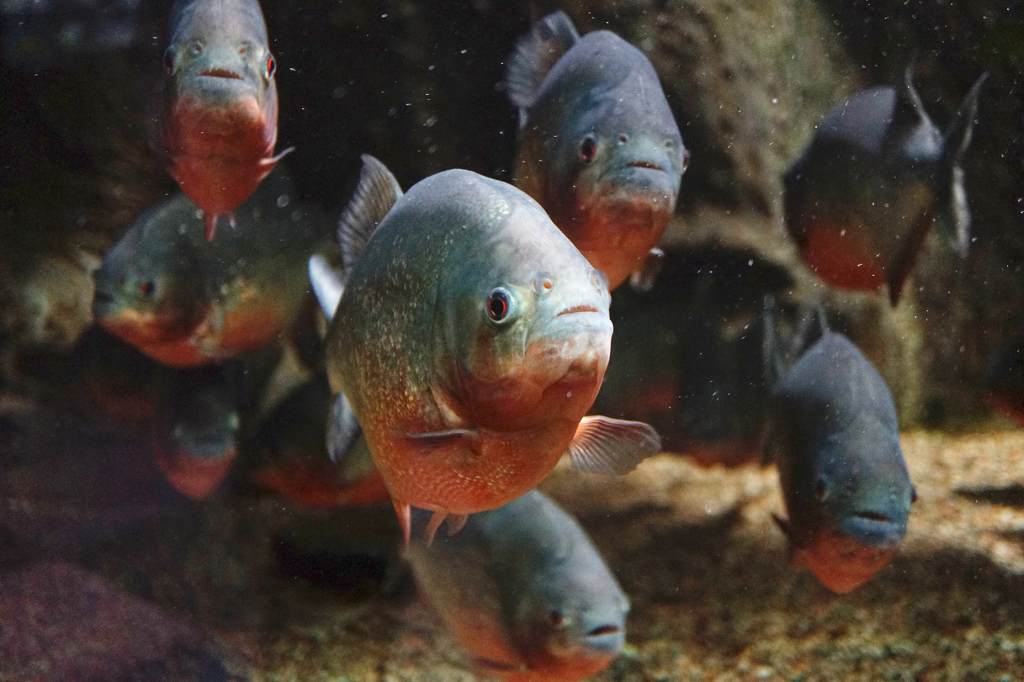 As it turns out, piranhas are a downright nervous fish. And can you blame them with a predator list like that? A study in 2005 concluded that piranhas act nervous and fearful when left alone in a tank. Researchers had to start covering their enclosures to keep the fish from stressing out.

The same holds true with aquarium-raised piranhas. They tend to hide, even during feedings. Of course, in larger groups, they become less timid. Nonetheless, they still prefer flight over fight when it comes to large prey. So much for Blofeld’s evil plan to deflesh traitors and secret agents fishy-style!

Sorry to break the 007 spell, but as Dr. Anne E. Magurran notes, “[Piranhas are] basically like regular fish. With large teeth.”

About 100 piranha “attacks” get reported each year in rural parts of South America. On rare occasions, fatalities are splashed across newspaper headlines. For example, in 2015, a six-year-old girl in Brazil was partially eaten by piranhas after her boat capsized. So, what gives?

When it comes to the grisliest piranha attacks, coroners’ reports almost always conclude the bites occurred postmortem. Of course, by the time these findings come out, the media has already moved onto the next big story. After all, piranhas-eating-people stories sell. But piranhas nibbling on cadavers? Not so much. Moreover, there’s a history to these tales that preconditions audiences to accept them. President Theodore Roosevelt first perpetuated the genre in his book Through the Brazilian Wilderness (1913).

Despite these observations, there are situations where you might garner a piranha bite if you’re not careful. During mating season, piranhas will give people warning nibbles when they get too close to their eggs. And during the dry season, when hundreds of piranhas congregate in shallow pools? Hunger does make the fish more aggressive.

To the point of cannibalism.

Yet, even during this “perfect storm” of circumstances, piranhas remain more likely to flee large, living animals than take a hunk of their flesh. How the fish behave ultimately depends on whether hunger overrides fear.  Since far more humans eat piranhas than piranhas eat humans, the fish have more reason to worry.

Although we’re all familiar with the notion of piranha feeding frenzies that leave clean-picked bones where cattle or humans once swam, your chances of getting devoured by these aquatic predators remain infinitesimally slim.

But what if you starved a shoal of piranhas to the point of brazen action? It would take between 300 and 500 to devour an adult human. Sure, they could do it with startling rapidity (in about five minutes) because of their nasty rows of teeth and powerful jaws. But is it natural behavior? Nope. And good luck with the starving bit. Piranhas are adapted to survive for weeks without food, and they’d much prefer fruit, small fish, and worms to lost explorers or British superspies.