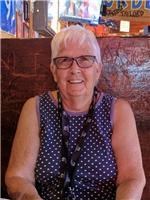 Elizabeth "Betty" Ann Anderson, age 86, of Fisher, MN. Passed away on Sunday, June 28, 2020 at her home. Betty was born to Melvin and Irene (Reader) Fenno on February 20, 1934 in Berlin, North Dakota. Over the years that Betty was growing up the family moved several times, first to Colman, South Dakota, Wabasso, Danube, and Olivia Minnesota, Kalispell, Montana and back to Berlin, North Dakota before moving to Wheaton, Minnesota where she graduated from high school and finally to Crookston. Betty completed the nursing program at Bethesda Hospital in Crookston and worked as a nurse for several years, including at St. Francis Hospital before venturing out to Colorado Springs and Helena, Montana. Her love of travel never left her. On April 10, 1965 she was united in marriage to John Anderson. After raising her son Tony and their children Richard, Mary and Margi, Betty and John retired to continue the travel adventure. They enjoyed winters in South Texas and summers at Rollag, Mn. When John passed away in 2001, Betty continued to travel between Texas and Rollag. The last several years she has spent the winters in Southern California with daughters Mary and Margi and until recently returned to spend at least part of the summers in Rollag. Besides her love of travel, Betty was a voracious reader, loved watching the Wild, the LA Kings the Twins and the Vikings and was always up for an adventure with her girls.