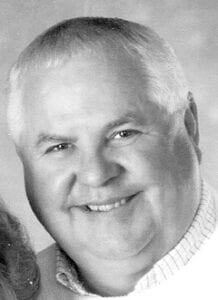 Jim was born to John Hubert Schieffer and Mary Lynch on Nov. 5, 1939, in Sauk Centre, Minnesota. He spent his formative years in Beach, where he lettered in football, basketball and track all four years of high school before graduating in the class of 1957. He attended Jamestown College, where he lettered in football, track and bowling and met his future wife, Joan Rogler. In the spring of 1961, he graduated from Jamestown College with a degree in math education, and later that year, on Sept. 16, he and Joan were married in Mandan. In the years that followed, their family grew, welcoming their three children – Bob, Bruce and Linda – into the world.

Jim’s working years were dedicated to teaching and coaching. Wishek High School, Dickinson Trinity and Grafton High School were fortunate to have him, not only as a math teacher, but also as a coach for football, track and wrestling. When he was out of the classroom and off the field, he devoted his time as a eucharistic minister at St. John’s Catholic Church, president of the N Starr Homeowners Association, and a member of the Knights of Columbus, Lions Club, Quarterback Club, Elks Club, National Education Association, and North Dakota Education Association.

After teaching, Jim found other ways to fill his days. Even in “retirement” he worked as a hail adjuster for State Farm, a sugar beet truck driver for the Dusek brothers and a driver for Hansons Auto and Implement. He loved his morning coffee group at Granny’s and his pinochle games at the Senior Center, as well as a good round of golf, a handsome fish on the line or a good travel story – and if you ask any of his family members, they will tell you that his favorite destination was, without question, Las Vegas.

A man of many names – whether it was “Jim,” “Mr. Schieffer,” “Coach,” “Schief,” “Dad” or “Grandpa” – James left his mark on the people around him with his stern looks, funny stories and soft chuckle. He is survived by his wife, Joan of Grafton; his sister, Swenda of Beach; his brother, Tom of Malott, Washington; his son, Bob and wife Deb of Moorhead, Minnesota; his son, Bruce of Fort Collins, Colorado; his daughter, Linda and husband Steve of Beulah; and his four grandchildren, Maren Schieffer, Morgan Schieffer, Lindsey Pouliot and Austin Pouliot.

He was preceded in death by his parents; his sister, Helen Rathbun of Missouri; and his sister Grace Siebert of Colorado.

In lieu of flowers, donations can be made to Grafton Alumni Association or St. John’s Catholic Church. Thank you for your generosity in honor of a wonderful man, husband, father and grandfather. He is dearly missed already, and your kindness honors him well.

Mass of Christian Burial will be Friday, June 26, 2020, at 10:30 a.m. at St. John the Evangelist Catholic Church, Grafton. Visitation will be at the church for one hour prior to the service. Interment will be at St. John’s Catholic Cemetery.

Social distancing guidelines will be followed and cloth face masks are strongly encouraged.

An online guest book is available at www.tollefsonfuneralhome.com

Tollefson Funeral Home of Grafton is in charge of the arrangements.