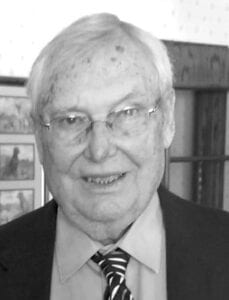 Franklin Lowell Dean Olafson was born March 26, 1934, on the Olafson family farm in Thingvalla Township to Valdimar “Valdi” Franklin and Lovisa Gudlaug “Louise” ( Jonasson) Olafson. He grew up in Thingvalla Township and graduated from Gardar High School. Dean served in the United States Army and after his discharge, returned home to farm and work in the family construction business, working until the age of 80.

Mountain and they had three children: Brian, Alan and Melanie.

Dean was a member of the Milton, Cavalier and Grafton curling clubs and Mountain American Legion. He served on the board of directors at Borg Memorial Home for many years. Dean also enjoyed dancing.

He is survived by his children: Alan (Dana) Olafson, Edinburg, and Melanie Kelley, Farmington, Minnesota; three grandchildren: Chad, Brock and Bailey; brothers: Roger (Marilyn) Olafson and Curtis (Bjork) Olafson, all of rural Edinburg. Also survived by his nieces and nephews.