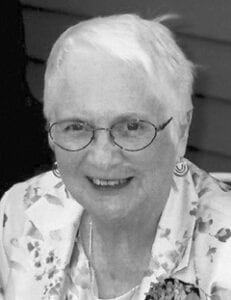 Jean was born January 22, 1923, to Thomas A. and Ellen L. Donelly in Grafton. She grew up on the family farm homesteaded by her grandfather in 1879. Jean graduated from Grafton HS in 1940 and graduated from the College of St. Scholastica in Duluth, Minnesota in 1944 with a degree in elementary education.

During the war years, Jean Donelly wrote letters to several high school friends serving overseas. One of those friends was Walter Keyes from Grafton. The letters Walter received from Jean provided hope and a safe haven in the jungles of New Guinea. After serving three years in the US Army Signal Corps in the South Pacific, Walter Keyes returned to Grafton in 1945. He promptly looked up his angel and Jean and Walter were married in Grafton in 1946.

Jean and Walter raised eight children. The family lived in Bismarck, (1949-60), Mendota Heights, Minnesota (1960-62), and moved to Sioux Falls, South Dakota in 1962. Jean taught for one year but her destiny was to raise and care for her family. She learned to be a great cook during her days on the farm. Her recipes for cinnamon rolls and “never fail” pie crust are cherished by her family. Jean loved to garden, sew and was an accomplished seamstress and quilter. Jean and Walter enjoyed playing cards and loved to throw steaks on the grill for family and friends. Grandma Jean frequently challenged her grandchildren to double solitaire. She seldom lost. Jean looked forward to and could usually complete her daily crossword puzzle past the age of 97. Most of all, Jean will always be remembered for the happy, loving home she provided for her family.

Jean and Walter enjoyed traveling the country to visit their children and grandchildren. With eight children there was always a place to go. Jean was not afraid to go fishing in a small boat in Alaska or hike to a mountain lake in Montana. Mom’s only complaint was when the family took away her car keys when she turned 90. She said that was worse than having cancer.

Thankfully, she adjusted and was happy as long as she was with her family.

Jean was preceded in death by her husband of 39 years Walter, her daughter Patricia Martin (Dennis) of Marshall, Illinois, grandson Ryan, her parents, and two sisters Marjorie Everett and Patricia Sabourin.

A private rosary and funeral service were held by the family June 20, 2020 at St. Mary Catholic Church in Sioux Falls. A memorial service will be scheduled at a later date.

The family wishes to extend special thanks to Dr. Michael Tobin and the dedicated staff at Avera Prince of Peace who gave Mom such wonderful care these last few years. Memorial contributions can be made to St. Mary School, 2001 S. 5th Ave., Sioux Falls, South Dakota 57105. www.heritagesfsd.com