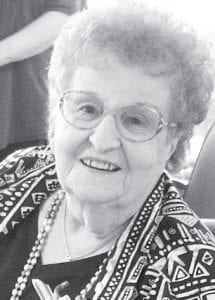 Rita Lessard, 99, passed away at Discovery Nursing and Rehabilitation of Vancouver, Washington.

No services will be held at this time. Her ashes will be laid to rest in St. John’s Catholic Cemetery in Grafton.

Rita, daugh- ter of Amede Patenaude and Orpha Bellmore, was born in Oakwood on April 16, 1921. In 1930, she was placed in Saint Patrick’s Orphanage in Prince Albert, Saskatchewan. It was there that she received her education. Every summer she traveled by train to stay with her father and older siblings in Leoville, Saskatchewan. At age 15, she stayed in Leoville where she worked at a Chinese restaurant and attended Saint Therese de L’Enfant Roman Catholic Church.

In 1939 she moved to Willow Bunch, Saskatchewan, where she kept house for a farmer. She later moved to Grafton and married Arsene Lessard on Feb. 24, 1941. She did janitorial work at Grafton Clinic and Metropolitan Bank, worked at the Dairy Queen and Senior Center. She attended St. John the Evangelist Catholic Church. Following retirement in the 1980s, the couple spent winters in Mesa, Arizona, and eventually moved there. She worked at McDonald’s and attended Catholic churches. In 2009, she moved to Woodland Convalescent Center in Washington state and in 2016 to Discovery Nursing and Rehabilitation.

She is survived by her sister, Vivian; sons, Art and Jim (Betty); one grandson; two granddaughters; and one great-granddaughter.