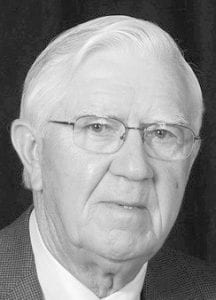 Ronald was a very kind, humble and selfless man focusing his energy on his family and friends. He enjoyed attending his grandchildren’s many activities.

Ronald was born July 10, 1930, at home in rural Fordville to Ralph and Rachel (Gillespie) Whaley. He attended country school through grade two and then attended Fordville Public School graduating, valedictorian of his class in 1948. Following high school, Ronald graduated from NDSCS and served in the U.S. Army.

After his honorable discharge, Ronald worked at Douglas Aircraft in El Segundo, California for a brief period, but soon returned to the family farm in North Dakota where he spent his life farming with his father, sons and grandsons until the age of 88. He especially enjoyed operating John Deere equipment.

Ronald was united in marriage to Mary J. Amundson of Inkster, Nov. 16, 1958. The couple made their home on the family farm until moving to town in 1994. Ronald was a member of Fordville Lutheran Church, Fordville Co-op Elevator Board of Directors and the American Legion.

He had a lifelong passion for aviation ultimately earning his private pilot’s certificate in 1986. Ron and Mary spent winters in Arizona where they enjoyed the warm weather and golf.

He was preceded in death by his parents; sisters, Elda Mae Whaley and Marjorie Hodena; brothers-in-law, James Hodena, George and Tom Amundson and Robert Woods; and niece, Linda Mayfield.

Visitation will be Sunday, March 15, from 2 to 4 p.m. at Fordville Lutheran Church in Fordville with a prayer service at 4. Visitation will also be held for one hour prior to the funeral in the church on Monday.