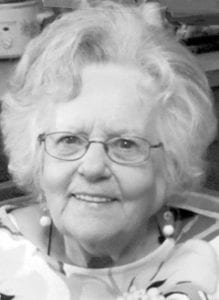 Anselma Rose Sobolik was born April 18, 1922, in Ops Township, Walsh County, daughter of the late Adolph and Rose (Karnik) Sobolik. She attended rural school there and graduated valedictorian from Pisek High School. Following her education she worked for Dr. Countryman and the Sill family in Grafton. In 1943, Selma enlisted in the United States Navy Waves, where she was chosen to serve as a code girl working at the Pentagon. Upon her discharge in 1945 she returned home where she met Clair Clemetson. The couple married on Aug. 12, 1947, at St. Luke’s Catholic Church in Veseleyville. They made their home in Park River, where they worked and raised their five children. In 1964 the couple purchased the Club Bar. Clair passed away on Sept. 23, 1971, after which Selma continued to operate the bar until 1991.

Selma was a member of St. Mary’s Catholic Church and Altar Society,First Care Hospital Auxiliary, Park River American Legion Auxiliary for 65 years, served on the hospital governing board and was a member of the Morning Glories Mass and Coffee group. Selma loved to embroider dish towels, read, craft and work on puzzles. She had an amazing eye for detail and color. She also enjoyed spending time with her children and grandchildren.

She was preceded in death by her parents; husband; and sister, Florence Shaw.

Mass of Christian Burial will be Monday, Feb. 17, 2020, at 10:30 a.m. at St. Mary’s Catholic Church, Park River. Visitation will be Monday for one hour prior to the service at the church. Military rites will be provided by Park River American Legion and the U.S. Navy Honor Guard. Interment will be at the Calvary Cemetery, Park River in the spring. In lieu of flowers the family would prefer memorials to First Care Hospital Auxiliary or Altru Hospice.

An online guest book is available at www.tollefsonfuneralhome.com